Logistics business Pallet-Track has launched a national Hooray for Hauliers campaign to celebrate the role of the key worker drivers who have kept Britain moving throughout the pandemic, as well as navigating Brexit on top of the day-to-day challenges of long hours and even longer distances to deliver for the nation. 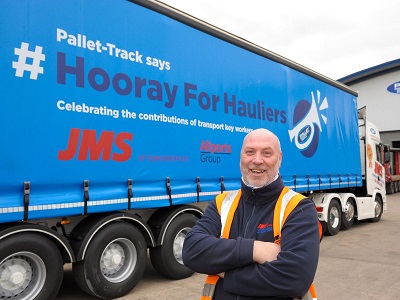 Neil Woodcock, a driver with JMS Transport and his #Hooray for Hauliers trailer

The initiative, which is taking the form of ‘# Hooray for Hauliers’ liveries on Pallet-Track member vehicles and a high-profile advertising hoarding campaign at the intersection of the M6 and M5 motorways, at the heart of the UK’s strategic road network, is to fly the flag for Britain’s transport and logistics workers.

The hoarding near Junction 6 of the M6 at Bescot, Walsall, north of Birmingham, is expected to be viewed by almost three million motorists over two weeks in March and cement the positive message into the consciousness of the driving public.

Launched on Tuesday, March 9, the campaign to celebrate the contributions of transport’s key workers is also encouraging other road users to photograph the liveried vehicles and share the images on social media using the #HoorayforHauliers hashtag, but only where it is safe to do so.

Nigel Parkes, founder and managing director of Wolverhampton-based Pallet-Track, said: “Rather like the clap for carers, this campaign goes out to all drivers and workers in all logistics businesses as a thank you for their tireless efforts and every day contribution, particularly over the last 12 months – they have kept the country going by putting food on the tables and vital PPE and health equipment into our NHS hospitals, some of which has been done on a pro bono basis.

“In this respect, the pandemic has raised awareness of the key worker status of lorry drivers up and down the UK who had previously not enjoyed a high profile, resulting in the dramatic skills shortage that still threatens our industry – this campaign goes some way to trying to address that issue.”

Three Pallet-Track members, PW Gates in Welwyn Garden City, JMS of Doncaster and Alan Firmin Ltd in Kent are proudly displaying the new #Hooray for Hauliers liveries on their vehicles as they travel thousands of miles making deliveries across their postcode areas and to all parts of the UK.

Chris Lynch, development director of PW Gates, which is also the location of Pallet-Track’s southern hub, said: “This is by way of a thank-you to all hauliers in all businesses who have worked tirelessly and together throughout the difficult times of this pandemic.

“We’ve all heard about the hard work of the NHS and care workers but not much about the hauliers, those essential workers who have gone the extra mile to deliver everything from food to pharmaceuticals as well as look after their own staff with regular testing and keep the UK’s wheels turning across the country.”

John Sheard, managing director of JMS of Doncaster, said: “This is a great initiative from Pallet-Track that we are happy to be part of and we hope that it starts a bit of a revolution as the sector needs a lot of support.

“It’s been tough during the pandemic, but the ordinary life of drivers is pretty tough and unappreciated with long hours, often poor rest facilities on their journeys and a lack of secure parking – issues that should be kept in the public eye after COVID-19 because we need to drive home the fact that drivers are indispensable.”

Paul Denyer, a director at Alan Firmin Ltd. in Sittingbourne, Kent, added: “While the other businesses have the livery on their larger trailers, we are putting it on a smaller vehicle to highlight the fact that the message is just as important for the whole industry – from the long distance drivers to the final mile delivery couriers, demand for whom has mushroomed during the lockdown as more and more people are ordering home delivery online.”