Motorists beware, police forces around the country are trialling new handheld speed guns that will make it far easier for them to catch and fine road users who exceed limits.

A number of UK constabularies – including Northumbria Police and Warwickshire Police – in recent months have announced they are beginning to use the latest version of the blue cameras, which have been described as ‘next generation’ enforcement devices.

The devices – each costing in the region of £10,000 – can identify a vehicle make, model and read a number plate from distances of up to 750 metres in daylight and at night.

All details captured can be uploaded to a database and penalty charge notices automatically posted to the vehicle keeper’s address, meaning there’s no need for officers to even stop motorists to issue fines.

The device is called the LTI 20/20 TruCam II Speed Enforcement Laser with Video.

Police forces have already confirmed they have taken delivery of the new gadgets, confirming that officers are undertaking training to use them effectively to improve speed enforcement in their areas.

Officially approved for use in the UK on the 24 June 2020, it is by far the most advanced handheld speed gun used to patrol UK roads and will make the process of punishing motorists less time consuming for forces.

The speed gun is the successor to the original TruCam device, which has been used by UK forces in the last decade.

The latest version shares an integrated laser and patented technology to measures the time and distance between vehicles.

It also has a digital video camera that can collect and store a complete chain of video evidence for speeding, though new for 2020 is an auto adjust feature for the focus, iris and shutter speed.

This allows operators to capture ‘crystal-clear images’ of a vehicle’s registration plate from up to 1,500 meters (0.9 miles) away. However, the maximum distance limit set by the government for any handheld speed gun in the UK is 750 metres, which the devices have been calibrated to.

While predominantly used for speed enforcement, the manufacturer – LTI (which stands for Laser Technology, Inc) – says it can be used to catch tailgating, distracted driving and even motorists who fail to wear a seat belt.

The latest version is far easier for police personnel to operate.

It has a large 3.7-inch LCD display that is trans-reflective to prevent glare on the screen when officers are trying to capturing footage in bright conditions.

Another advancement on the previous-generation camera is the facility to use it in the dark with operators able to switch to a ‘night filter’ at the push of a button.

The high-resolution imaging system not just captures evidence but can identify a vehicle make and model and even read the registration plate.

Also integrated is GPS technology that generates location-based information every time the camera is triggered.

When the footage, images and vehicle information are uploaded to the police’s database, it also includes historical data to say where and when offences were captured by the cameras – this drastically reduces input hours and admin for constabularies.

All of the information is collated in the system and can be cross-referenced with vehicle owner records to automatically issue Fixed Penalty Notices (FPN) in the post, also reducing process time for officers.

The TruCam’s measurements, video and photographic evidence has all been given the green light to be used in court to prove a driver’s guilt, should the accused choose to dispute a FPN or if a speeding offence is so severe that it results in a ban.

The device is claimed to be capable of enforcing multiple speeds and can collar hard-to-catch motorcycles by reading rear number plates.

They’re also said to be untraceable to jamming devices.

A spokesman for the manufacturer told This is Money: ‘In terms of performance, the new camera refreshes the older unit which was developed over 10 years ago with up to date hardware, such as increasing sensor resolution, processor speed and screen size.’

There are currently over 6,000 LTI devices used in more than 90 countries today, the manufacturer says.

Essex Police has been using the first-generation TruCam since May 2014.

It conducted a review of the cameras last year, concluding that ‘the accuracy and detail produced by the device to be of exceptional quality’.

The force has seven of the £10,000-a-piece devices – six of them funded via the Safer Essex Roads Partnership and one by Tendring District Council.

It confirmed that – unlike the TruCam II – the older cameras can only be used during daylight hours, but had been rolled out on 679 occasions between 2014 ans 2019, resulting in 24,922 excess speed offences of which 20,596 resulted in a prosecution (83 per cent).

‘Not all speed offences result in prosecutions and some may be subject to no further action,’ the force’s report clarified.

One of the first constabularies to take delivery of the latest edition of the expensive blue speed gun is Northumbria Police.

It has used funding from the Northumbria Safer Roads Initiative to support the force’s ‘Operation Modero’, which is focused on speed enforcement. 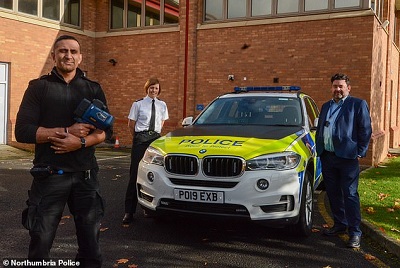 Superintendent Helena Barron, who leads Northumbria Police’s Operations Department, welcomed the investment and believes they will make a significant difference on the region’s roads.

She said in November: ‘These cameras are another tactic at our disposal to tackle motorists who are unwilling to follow the rules.’

‘I am pleased that the new cameras will allow much more flexibility in deployments across our area,’ she said.

And it won’t be just officers who use the speed gun.

Last summer, Northumbria Police hand-picked a team of dedicated traffic Special Constables to support motor patrol officers. They will be trained to use the new cameras, bosses confirmed.

A scan of police twitter accounts suggests others are also training up teams of police community support officers (PCSO) to use the device across numerous regions.

In June, Warwickshire Police confirmed it had spent £20,000 of funding from the Road Safety Fund on the latest devices to help officers to enforce speed limits more effectively.

It said the advanced camera will ‘free up officers’ time as they are able to record the evidence required at the point of capture, reducing the need for officers to attend court in those cases where an offence is contested’.

Philip Seccombe, Warwickshire Police crime commissioner, said in the summer: ‘Speeding makes it more difficult for a driver to maintain control of their vehicle and the police have my full support to enforce speed limits and take action against those who break the law as this will make Warwickshire’s roads safer for everyone.’

Inspector Jem Mountford added: ‘The new equipment is very portable and this means officers can easily set up anti speeding operations on hot spot routes identified by the force, with the added benefit that officers can be more mobile and responsive to changing demands.’

Neighbouring Gloucestershire police said several of its PCSOs in Stroud have been trained on how to use the cameras.

A number of other forces have taken to social media as a warning to motorists that previous generation TruCam devices are being used in their areas.

LTI says a ‘couple more forces’ have taken orders of the latest TruCam II devices to replace their older units.

However, it said that uptake of the new units ‘has been slow due to Covid-19’ though confirmed that ‘many other forces around the UK have trialled the TruCam II’.

‘He is currently working on getting TruCam sites set up for different roads over the South so hopefully he can enforce on other roads as well soon.’

Sandbatch Police also tweeted in the last few days: ‘Officers have been out with the TruCam device on the A533 Middlewich Road, Sandbach.

‘During the half hour, 11 vehicles were caught exceeding the 30mph speed limit with the highest recorded at 45mph.’