A drunken lorry driver, who celebrated getting his driving job by drinking a quarter bottle of whisky and then led police on a 20-mile chase down the M4, has been jailed for 14 months. 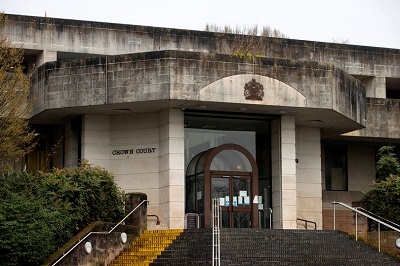 Police pursued Andrew Jason Champion, 53, from Rhych Avenue, Porthcawl, for 20 miles along the M4 on 6 May this year as he drove an HGV erratically along the motorway.

Champion ignored the police’s flashing blue lights as he weaved along the motorway, where he came close to hitting a broken-down vehicle on the hard shoulder being attended to by a recovery vehicle, the court was told.

Finally, police officers were forced to stop Champion by deploying a stinger device. When apprehended his speech was slurred and he was unsteady on his feet. He was found to have drunk at least a quarter of bottle of whisky before getting behind the wheel of the HGV.

When breathalysed Champion showed a reading of 137mg. The legal limit is 35mg. He told police he had drunk the whisky that evening in celebration of getting the job.

PC Clifton, who was the first police officer who spotted Champion, told the court it was the worst driving he had seen in his career and how he was too scared to pull the HGV over as it was being driven so erratically, and so followed to the rear side of the vehicle flashing the police car’s blue lights.

Recorder Mark Powell QC, who sentenced Champion at Newport Crown Court on Monday (27 September) told the driver it was only by “the grace of God” he had not killed anyone during the chase.

The driver, who is currently undergoing tests for bowel and stomach cancer, pleaded guilty on August 23 to dangerous driving and driving while over the alcohol limit. Nik Strobl, defending, said Champion saw it as “the biggest mistake of his life” and he can’t understand what caused him to drive his HGV in that state.

He added that the defendant’s drinking had spiralled out of control two years ago due to a series of incidents including the discovery of his friend’s body after he had killed himself.  As Champion’s marriage began to break down over financial difficulties, he had decided to take the driving job, the court was told.

Recorder Powell QC told Champion: “Frankly you had no business taking a job in those circumstances,” adding that the damage he could have caused others “doesn’t bear to think about.”

He continued: “There, by the grace of God, went considerable carnage if you’d come into contact with other road users or if the vehicle had been driven at a time when there was more traffic about. It is abundantly clear that you were not in a position to make judgements about this.”

The judge sentended Champion to a total of 14 months in prison on the grounds that his driving had been so dangerous driving and the extent of his intoxication.

Champion will have to serve half his sentence in custody before being released on licence. He was also disqualified from driving for four years and seven months beginning from August 23, 2021, when the initial disqualification was imposed. He will also have to take an extended driving test before he can regain his driving licence.

Recorder Powell QC added: “I have to protect the public and punish people when they drive HGVs when they are four times over the limit.”