Under the terms of a £1.6bn government bailout, the congestion charge in London will be re-introduced from today (18 May 2020). The bailout was emergency funding to keep the capital’s Tube and bus services running through to September. 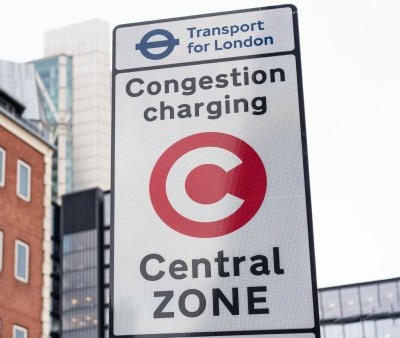 Downing Street defended the changes saying the congestion charge “only applied to a small area of central London”.

The prime minister’s official spokesman said roads in these areas “would come to a halt without it” and it was an “important tool to ensure that emissions in London remain low and support better air quality”.

Transport for London said that the times for when the charge will be applied is to be extended to between 07:00 and 22:00, with the price rise in place for a year.

Both measures will be reviewed later to see if they are made permanent.

A system of reimbursement for NHS workers in place before the charge was suspended on 23 March will also be extended to care home workers.

Mayor of London Sadiq Khan said the measures were designed to avoid a build up of traffic after the government urged people returning to work to avoid public transport.

TfL said the plans would “create more space for social distancing when walking and cycling, ensuring that the people who have no choice but to return to work in central London can do so as safely as possible”.

Some streets will be converted to walking and cycling only, with others restricted to all traffic apart from buses, creating “one of the world’s largest car-free zones”.

Gareth Powell, TfL’s Managing Director for Surface Transport, said: “Throughout this extremely difficult time, Londoners have followed Government guidance not to travel and we have seen an unprecedented drop in traffic levels. This brought with it a dramatic fall in pollution. In the last few weeks, the capital has become a greener, cleaner place and we are determined to keep it this way. To prevent the city clogging up, and to support the greater levels of walking and cycling that will vital to London’s re-start, we are reinstating road user charging schemes and making walking and cycling easier and safer than ever before.

“The London Streetspace programme is a fantastic opportunity to help Londoners move about the city in safe and sustainable ways in greater numbers than we have ever seen before.  This will put public health, safety and the environment at the heart of London’s gradual emergence from lockdown.”

Adam Tyndall, Programme Director for Transport for London First said: “Increasing numbers of people will need to travel to work as we emerge from lockdown, and social distancing placing significant limits on public transport capacity. Londoners are going to need to walk and cycle a lot more and Streetspace is the right approach to getting London moving again.

“The ULEZ and Congestion Charge should be reintroduced to help prevent our roads from becoming congested and polluted. The objective should be to re-open London’s economy in a safe and sustainable way, with these measures regularly assessed to ensure that they are still making movement around the city easier, not just for people but for the vital goods and services that support our lives and our economy.”