Gone in 10 seconds: Thieves able to drive-off in a matter of seconds 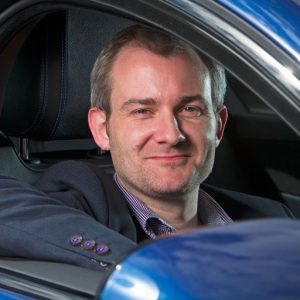 Steve Huntingford, editor of What Car?

Some of Britain’s newest and most popular cars are at risk of being stolen in a matter of seconds, because thieves are able to exploit weaknesses in their keyless entry and start systems, according to groundbreaking market intelligence from Britain’s leading consumer champion and new car buying platform, What Car?.
An exclusive test by What Car? found the new DS3 Crossback Ultra Prestige could be unlocked and started in 10 seconds by thieves using specialist technology. The Audi TT RS could also be stolen in 10 seconds – although only when its optional keyless entry system was active and its motion sensor technology had not disabled the keyfob. The recently replaced Land Rover Discovery Sport could also be stolen in 30 seconds.

Car theft rates in England and Wales have reached an eight-year high, with more than 106,000 stolen last year alone. Vehicles fitted with keyless entry and start systems are being targeted by thieves. Criminals using specialist tools can capture a key’s signal and relay it to another device next to the car, allowing them to enter and start the vehicle.

What Car? tested seven different models, all fitted with keyless entry and start technology. Its security experts were able to break into a number of them within a matter of seconds.

Some new models on sale today feature technology that helps prevents keyless theft. Manufacturers, including Audi, BMW, Ford and Mercedes-Benz, have introduced motion detection technology inside their car keys – if the key is left untouched, it stops emitting a signal. However, if the key is in a pocket or handbag, and the owner is walking around, the car can still be vulnerable.

Jaguar Land Rover has taken a different approach, introducing ultra-wide-band radio technology on some of its latest models, which transmits a wide range of signals from the key, meaning thieves can’t lock onto the signal and fool the vehicle.

What Car?’s security experts couldn’t steal any vehicle with their keyfobs deactivated. However, this technology is not yet widely available.

Steve Huntingford, editor of What Car?, said: “It is outrageous that some car makers have introduced keyless entry and start systems without making them anywhere near as secure as the traditional alternatives they’ve replaced.
“It is great news that a small number of brands are taking the problem of car theft seriously, but more needs to be done to improve security, particularly of desirable used models.”

To see footage of the exclusive test, visit: https://www.youtube.com/watch?v=sE2Uxxtci-4&feature=youtu.be

The results of What Car?’s exclusive security test can be found below: 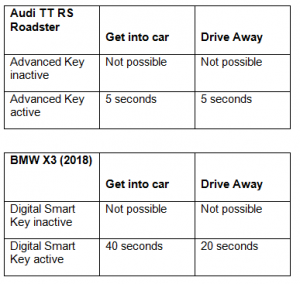 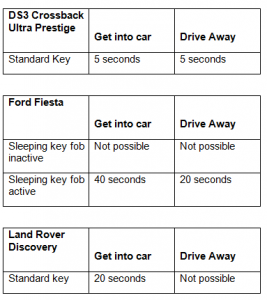 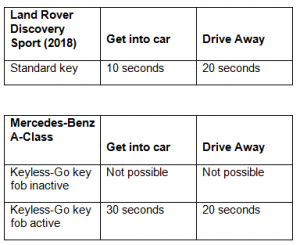