Yesterday (21 July 2021) Lord Frost gave a statement to the House of Lords on the current status and implementation of the Northern Ireland Protocol. 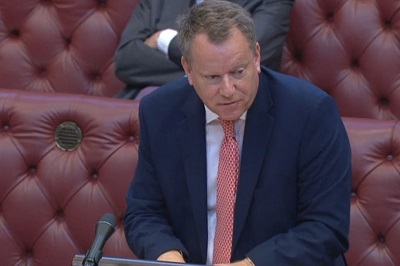 The Northern Ireland Protocol is a series of measures to ensure that a hard border between Ireland – which is a part of the EU, and Northern Ireland – that remains a UK country, is not required. The EU requires many goods – such as milk and eggs – to be inspected when they arrive from non-EU countries, while some products, such as chilled meats, aren’t allowed to enter at all.

Despite signing up to the agreement and forcing ratification, Boris Johnson now says the protocol represented a huge compromise by the UK and has accused the EU of applying it too rigidly. Now, the UK government wants to get rid of most of the checks, and reduce the customs procedures, in order to allow goods to flow more freely.

It also wants to remove the role the European Commission and the European Court of Justice have in overseeing how the protocol works and it is calling for the EU to agree to a “standstill” arrangement on the grace periods, and for the EU to freeze legal action, while negotiations are held.

The EU has been critical of the UK’s stance and has insisted it must implement the terms of the protocol. It says it is ready to continue searching for “creative solutions”, but it will not agree to a renegotiation.

Angela McGowan, CBI Northern Ireland Director, said: “After months of deliberations, businesses are exasperated that the Protocol continues to dominate the headlines with no end in sight.

“Firms are determined to make it work, and to see it bring much needed prosperity to Northern Ireland. That starts by the Joint Committee delivering on the Business Consultative Working Group immediately. It’s time for the EU and the UK to bring business into the discussions to break the deadlock.

“The extension of the chilled meat grace period provides negotiators with the space to achieve mutually agreed workable lasting solutions, including a bespoke veterinary agreement and trusted trader arrangements for the movements of goods in the UK internal market.

“These solutions need to be agreed urgently to unlock investment and give Northern Ireland’s businesses and households the certainty they need and deserve.”

Dave Howorth, executive director at supply chain and logistics consultancy, SCALA, comments on calls to overhaul to the Northern Ireland trade agreement, as well as the potential fallout for businesses:

“Ever since the Protocol came into place on 1st January there has been significant disruption to supply chains between mainland UK and Northern Ireland. Whilst businesses and hauliers have come to terms with some of the onerous administrative requirements there are fundamental obstacles associated with some products, most notably sausages and chilled meats due to the UK leaving the EU and its food regulatory standards.

“At the crux of this issue, and the other challenges associated with the supply of products from UK mainland to Northern Ireland, is the fact that in order to avoid a hard border between Northern Ireland and ROI Northern Ireland effectively remains part of the EU single market as it stands.

“Beyond a potential “Sausage War” it is clear that the Northern Ireland Protocol is forcing businesses to rethink their supply chains. Retailers in Northern Ireland have already switched to more local sourcing. They are experiencing additional cost of supply from the UK mainland and therefore, ultimately, prices to consumers have increased. One wonders whether at some point retailers such as Sainsbury and M&S will ultimately consider the difficulty of supplying to and trading in Northern Ireland too high an effort to sustain, with today’s news that M&S will be cutting its Christmas range unless a resolution could be found a potential harbinger of events to come.

“In terms of resolution the stakes are high. If the UK Government was to press the “nuclear button” and independently refuse to comply, the EU may take punitive action and suspend parts of the wider UK-EU Trade Agreement, which would send a shudder down the spine of Supply Chain Directors across the UK and Europe.”