Clément Beaune, Secretary of State at the French Ministry for Europe and Foreign Affairs with responsibility for European Affairs, has been visiting Le Havre last week. The aim of the visit was to determine the current status of the “Brexit” arrangements implemented in the port, with regard both to the infrastructure necessary to its satisfactory management and the proposal for an additional transit solution for services between France and Ireland. 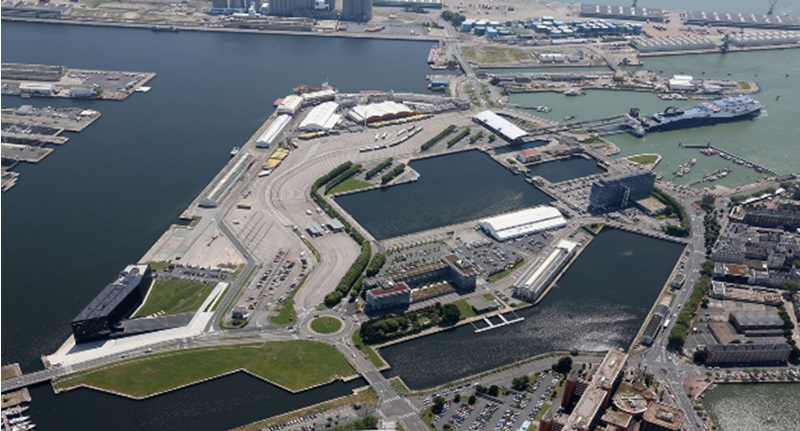 The UK terminal in Le Havre

In cooperation with the official authorities and Brittany Ferries, HAROPA – Port of Le Havre therefore presented the work done with the whole range of actors and partners involved in traffic flows to and from the UK and in checks on entries to, and departures from EU territory (Sub-Prefecture, the Normandy ports, border police, customs, shippers, among others).

The future relationship between the European Union and the United Kingdom is still under negotiation. The transition period is to end on 31 December 2020 and new rules will apply starting on 1 January 2021. The possibility of a “hard Brexit’ cannot however be ruled out at this stage and it is therefore necessary to put goods checks in place at the border, which will entail an obligation for businesses to complete import and export declarations as well as obtaining, where appropriate, sanitary or phytosanitary certificates, etc.

In addition, whatever the nature of the relationship that follows the transition period, the Port of Le Havre will once again be a physical border between the United Kingdom and the EU for people and goods entering the single market.

Baptiste Maurand, CEO of the Port of Le Havre points out: “Our priority at Le Havre port has been to put everything in place, in conjunction with our partners, to ensure that goods throughput continues to be fluid, especially for imports, seeking to ensure that inspection times are short so that congestion can be avoided at the terminal”.

As early as September 2018, the port began to prepare its response to the challenges of Brexit by:
→ ensuring good coordination between the Le Havre port complex and the Normandy ports,
→ developing essential infrastructure (offices and checkpoints),
→ preparing for the processing of documentary and physical flows.

The various postponements of Brexit have enabled us to consolidate the initial measures (begun as long ago as 2018 for the first deadline on 31 March 2019) by organising for the long term with our partners in the port community and rolling out permanent infrastructure.

The project has been structured around two core programmes for seamless goods flows:

Taken together, all the measures implemented by the Port of Le Havre in preparation for Brexit total €1.75m.