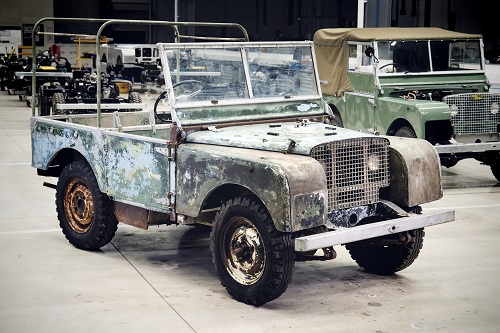 After playing a starring role in Land Rover’s 70th anniversary celebrations last year, the ‘missing’ original launch Land Rover demonstration vehicle from the 1948 Amsterdam Motor Show has returned to the road for the first time since the 1960s, following a year-long restoration.

Rebuilt by a team of experts at Land Rover Classic at its Classic Works facility in Coventry, which is dedicated to preserving Land Rovers out of production for 10 years or more, it was renovated using a mixture of traditional skills, original drawings and 21st century technology.

The historically important pre-production vehicle, which had vanished for decades but was found in 2016 in a garden near the Solihull factory where it was built, has been kept as authentic as possible and returned to its correct 1948 specification – including left-hand drive configuration, prototype braking system and all-wheel drive controls.

This approach required the team to strip the vehicle down to its bare chassis and begin a painstaking process of testing and checking which components could be reused and rebuilt following decades of decay and rust.

Calum McKechnie, Head of Land Rover Classic, said: “It was important to strike the right balance when restoring the launch Land Rover. While there was a need to replace some parts, we were keen to keep as much of the original vehicle as possible in order to retain the unique characteristics of this 70 year-old model. The team has done an incredible job and the end result is a testament to the unique expertise and tireless passion of the experts at our Classic Works facility.”

While the front axle required no significant repairs, the rear axle showed signs of extreme damage and fatigue. To understand the extent of the problem, the original part was X-rayed and depth-tested using state-of-the-art techniques and found to be strong enough to keep, rather than be replaced. During this process the Land Rover Classic technicians even uncovered the original axle number, which was thought to be lost.

The original through-dash selectable 4WD system controls, known by enthusiasts as the ‘Organ Stops’ due to their similarity with the controls found on church organs, were also reinstated. The trio of pull-push knobs on the dash panel operate the two and four-wheel drive transmission and High and Low range gear selection. This system was only fitted to some early pre-production Land Rovers, before being replaced by a simpler set-up for production. Land Rover Classic technicians used their expert knowledge to reinstate the original combination of rods, levers and linkages to replicate the design of the vehicle when it made its first appearance in 1948.

Pre-production Land Rovers were also fitted with a Lockheed braking system, while customer vehicles featured Girling brakes. Over the intervening decades, the rare set-up on the ‘missing’ Land Rover had been removed, so Land Rover Classic referenced period drawings to restore the authentic Lockheed design. This meant engineering replacement master and wheel cylinders, drums, pads and backplates before the brake pipes were carefully hand-fitted to match the routes followed on the original vehicle.

The flaking exterior paintwork doesn’t look like it has been subject to a year-long restoration, but the goal was always to retain the patina of this important vehicle. Minor repairs were made to the original panels to remove tears and sharp edges. Where new panels were needed, they were recreated in original 2mm thickness aluminium – unique to pre-production models – and painted in the original light green paint, colour matched from the underside of the original seat base, before being aged to complement the original panels.

Michael Bishop, Land Rover Classic Build Engineer, said: “Bringing this historically important Land Rover back to life was a huge challenge, given its wear, tear and decay from the elements since the 1960s, but also a real pleasure. Being able to open up our archive and revisit the original Land Rover engineering programme from over 70 years ago was a great privilege for the whole team.”

With the original badge missing, the team went to great lengths to ensure this was recreated exactly as it was more than 70 years ago. To do this, they digitised a photograph of another Land Rover on the stand at the 1948 Amsterdam Motor Show. In-house Computer Aided Design specialists then transposed the photograph to calculate the size of the lettering and its position on the front wing to cast an accurate replacement.

For parts that needed to be replaced or had been removed over the vehicle’s life, the team used the extensive archive of original drawings kept by Land Rover Classic, plus access to other surviving pre-production Land Rovers. These technical illustrations helped to restore the original routing and mounting system of the exhaust, the brass wheel hubs, the gearbox and transfer box.

Interesting discoveries during the work included an original King George V sixpence coin from 1943 which had been deliberately left under the galvanised capping of the rear tub, as a hidden memento, while the team worked with the Forestry Commission to identify the wood type used for the sections at the rear of the front seats. These ash elements were then replaced like-for-like.

With a fully-rebuilt engine incorporating specially-made pre-production-specification high-compression pistons, the result is a vehicle that drives just like it did when it left the factory and retains the unique patina acquired over more than seven decades of use and disuse.

The finished vehicle is taking pride of place on the Land Rover Classic stand at the Goodwood Revival meeting this weekend, before joining the active vehicle collection at the Classic Works facility in Coventry.