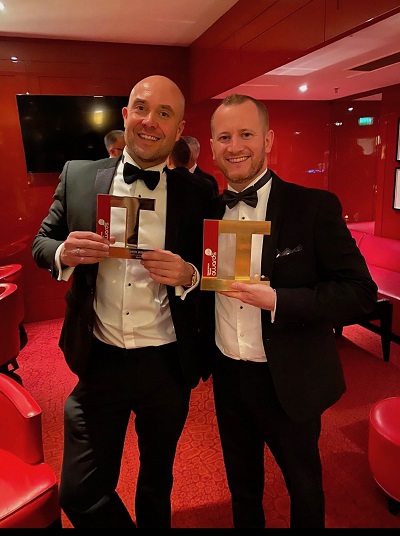 Leeds-based courier and van fleet insurance specialist, McCarron Coates, has proved it has the Midas touch, by scooping two prestigious national Insurance Times Awards – considered the top accolades in its sector – less than two years after the business’s foundation.

The awards were decided by a shortlisting process, followed by panel interviews in London.  The judges commented on the innovative approach McCarron Coates has employed, to get into the minds of the type of people it insures and understand their risk profile at a deep and informed level.

They particularly referenced the way in which McCarron Coates is using consumer research, to help change White Van Man into Wise Van Man when it comes to safe driving and risk containment.

This insightful approach is being used in support of the bespoke insurance package the brokerage has created for the Van Excellence scheme, operated by its partner client, The Freight Transport Association (FTA).

Additionally, the judges praised the way in which McCarron Coates has delivered significant savings to clients in the relatively new gig economy. This has been done by thoroughly auditing costs attached to the insurance claims relating to damaged hire vehicles.  Through its approaches, McCarron Coates can save around 30-50% of the claims’ payments incurred by a courier fleet.

The brokers behind the business, Ian McCarron and Paul Coates, received their two Insurance Times Awards from comedian, Greg Davies, at a glittering ceremony held at the Grosvenor House Hotel, London.

Ian McCarron says: “It was a night we will never forget.  We were delighted to first receive our Silver Award, in a category that all commercial insurance brokers want to win.  This has given us recognition as one of the best brokers in the country.  When we then scooped a Gold Award as well, the celebrations really began.”

Paul Coates adds: “We have worked phenomenally hard on behalf of our clients and this has been vindicated.  We have also embraced new ways of approaching our business and our marketing and the judges saw that and commended it. By thinking differently, we have set ourselves apart from other brokers and been rewarded with these top awards.  It was beyond our wildest dreams to win one award, let alone two.”