Inside Nikola’s truck technology – from fuel cells to taillights

The USA is in the vanguard of fuel-cell technology, and one of the leading players in the field is Nikola Motors. 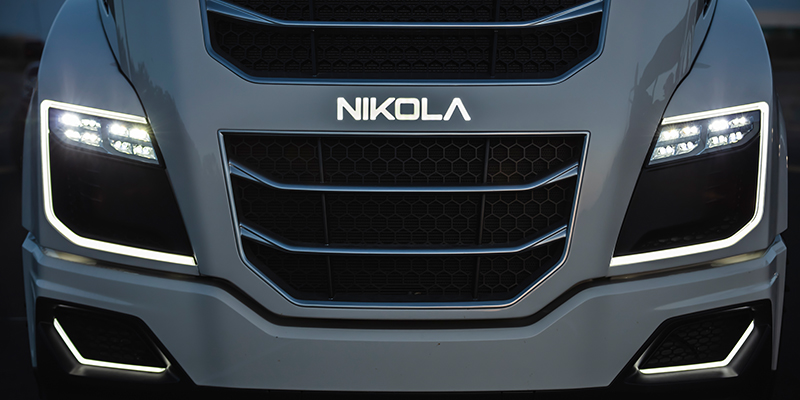 Nikola Motor’s fuel cell truck is packed with advanced technology that automakers have experimented with. But it’s new tech to the heavy-duty trucking industry.

Its application makes Nikola’s hydrogen-powered Class 8 haulers among the most interesting of the advanced trucks approaching market introduction.

The Phoenix, Ariz., company has three trucks under development. The first production models are due toward the end of 2022.

The Nikola One sleeper and Nikola Two day-cab designs are for North America. The Nikola Tre (Norwegian for “three”) cab-over design, due in 2023, is for the European market. All are built on versions of the same platform. The One and Two share exterior design as well. 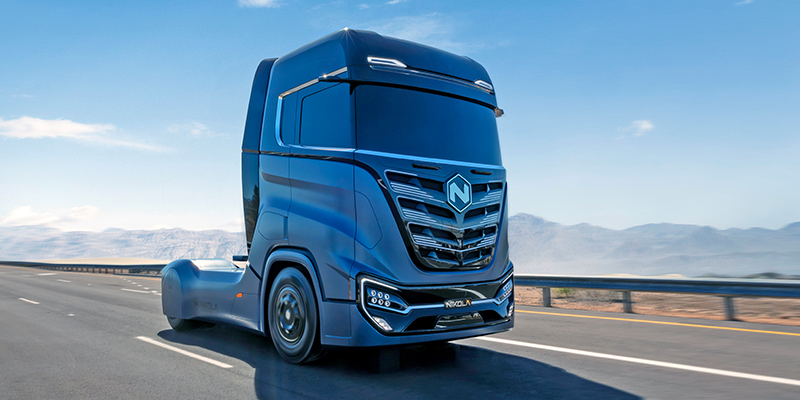 To be efficient, the trucks had to be different, said Trevor Milton, the company’s founder and chief executive.

A fuel cell truck is an electric truck that makes its own power by separating electrons from hydrogen atoms in the fuel cells. The electricity is routed through large storage batteries to the truck’s electric drive motors as needed. Nikola’s 250-kWh lithium-ion battery packs stack vertically behind the cab.

Hydrogen fuel cells will provide power for most Nikola trucks. But the company says it will build battery-electric versions of its day-cab models for customers who want them. Electric powertrain components are common to both hydrogen and battery trucks. 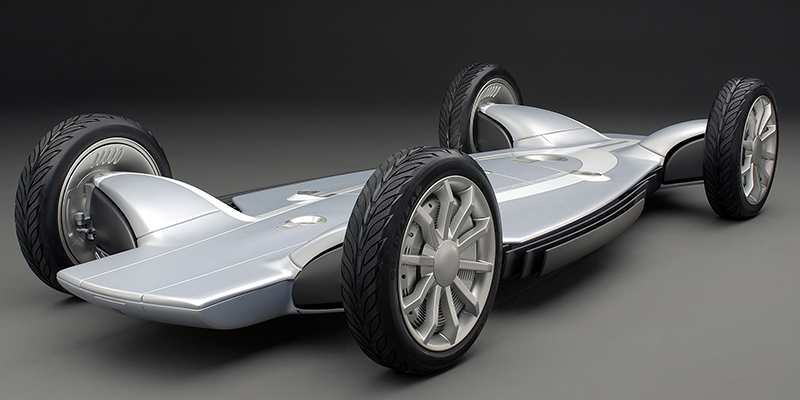 Nikola’s “skateboard” platform puts the axle-mounted motors, transmission, hydrogen tanks and most of the power electronics underneath the cab.

A skateboard platform eliminates the need for a long hood in front of the driver. That gave Nikola chief designer Steven Jennes almost four feet of extra room with which to play.

That space provides room for a rolling office in the day-cab trucks that use a 210-inch chassis. The office has a pull-down table and chairs mounted in in the rear wall of the cab. It can be customized with other equipment, including a set of bunk beds and an audio-visual entertainment system.

The 220-inch Nikola One chassis has extra space used for the sleeper compartment and its furnishings.

The Tre has a smaller cab because of its cab-over design, but shares most of the same interior treatment, and all the technology, with the One and Two.

Moving the driver’s compartment into the nose of the North American trucks also permitted Jennes to design a mid-mounted door. It opens onto an area behind the seats, so drivers no longer crawl directly into the seat from the doorway.

The cab design is borrowed from bullet trains, with a huge wraparound windshield and curved lines that encourage smooth airflow for improved fuel efficiency.

An air scoop moulded into the roof of the cab improves the truck’s aerodynamics. It sucks in air from high above the road to use for cooling the cabin and parts of the powertrain.

Jennes placed the windshield frame on the leading edge of the cab’s doors, exactly where the windshield would have started if the truck had a long hood hiding a diesel engine.

It’s a nod, he said, to the conventional diesel trucks Nikola hopes to replace.

Nikola has traded the large side mirrors on conventional trucks for a digital system. Slender housings on the cab hold cameras that provide the driver with a view of the truck’s surroundings.

Screens mounted on each of the A pillars display images from the cameras in about the same place a driver would look to view conventional mirrors. The camera images also can be displayed on either of the two information screens in the dash.

The system, developed by Bosch and digital-vision specialist Mekra Lang, shifts the view as the truck and trailer turn or reverse, providing the driver with increased visibility. The camera systems are awaiting approval from safety regulators.

A smartphone-based digital key system does away with physical keys. The driver can lock and unlock the cab and start the truck with a smartphone. The codes can be shared with relief drivers and others as necessary, eliminating problems with misplaced keys. 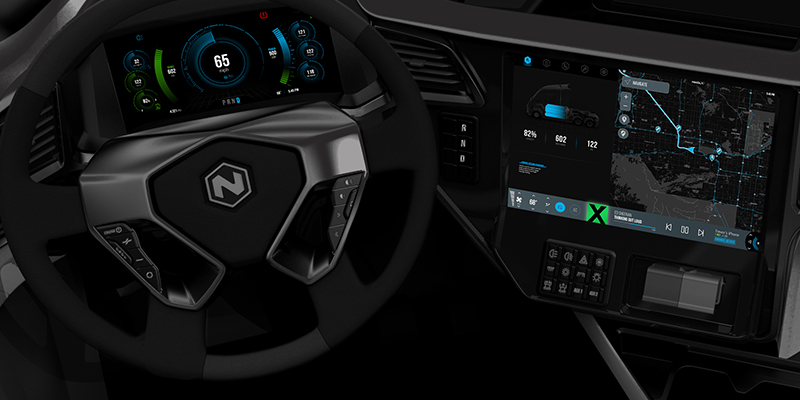 The Nikola truck diver’s compartment more closely resembles the front seat and dashboard area of a luxury passenger car than that of a Class 8 truck.

Floors are covered in faux wood planking. The seats are leather, the dash is padded. Instrumentation is digital. Instead of a panel of dials and gauges, the driver looks at a pair of information screens.

A driver-facing 14-inch screen displays speed, tire pressure and other operational information. A 21-inch infotainment screen in the centre of the dash has climate and audio system controls. It also displays GPS mapping, energy consumption information and myriad types of data and diagnostic information.

Nikola’s electronic power steering is another Bosch contribution and one of the first on a Class 8 truck. It is the basis for numerous safety and autonomous driving systems – such as lane centring – that rely on electronically controlled steering.

The system sends an instantaneous digital signal when the driver begins applying the brake pedal. The brakes start working within milliseconds. Stopping distances are 30 to 60 feet shorter than with a standard mechanical air brake system, Milton said.

The air brakes are augmented with regenerative braking. It uses friction from the electric motors to slow the drive axle while generating electricity that’s stored in the battery pack.

Electrically driven axles – eAxles – from Bosch will move the truck.

Each eAxle has two liquid-cooled motors, one for each wheel. Nikola trucks can be configured with one or two driven axles.

Each 800-volt motor supplies 250 peak horsepower, for 500 horsepower per driven axle, or up to 1,000 horsepower and 2,000 pound-feet of torque for a two-axle configuration.

All lighting on the trucks, from headlamps to cabin to tail lamps, is LED.

It uses less power, an asset in an electric truck. It also is easier on the drivers’ eyes inside the cabin.