After more than a decade of excellent performance from its other Andover Trailers products, Kilmarnock-based Blackwood Plant Hire has taken delivery of its first purpose-built plant bodies from the Hampshire manufacturer. 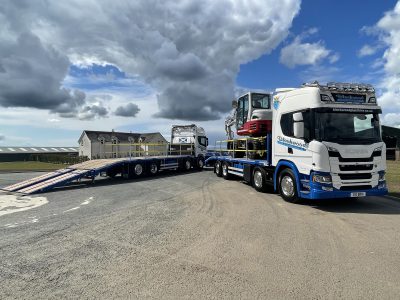 Mounted to two identical 32-tonne, 8×2 Scania G450 chassis, the specialist plant bodies are new additions to Blackwood Plant Hire’s commercial vehicle fleet, continuing a relationship between the two companies that began with the delivery of a tri-axle step frame trailer in 2008.

Paul McCormack, Managing Director at Blackwood Plant Hire, says: “Over the years we’ve had five new step frames and a second-hand Andover plant body in our fleet – all of which have consistently performed superbly. So, when it came to specifying these new trucks the decision was simple.

“Andover builds to our exact spec, delivering products that are ultra-strong and extremely lightweight – a perfect combination. No matter what is asked of these new rigids, we know they’ll be up to the task. Then when we eventually come to sell them on, Andover’s reputation means that they command strong residual values.”

Each plant body has been precision engineered by Andover Trailers to the individual Scania chassis. The new rigids include a double crank beavertail that is connected to a pair of 2.8m long hydraulic power toe ramps. The ramps feature Andover’s pioneering fold-forward design – which helps to reduce drag and deliver impressive fuel savings – and are also fitted with hydraulic sideways movement, which allows them to be brought together to assist with loading narrow machines. 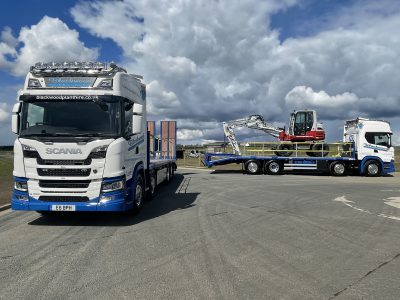 The new bodies also benefit from Andover Trailers’ trademark low-profile deck, which is achieved by designing the cross members to transect the body runners, rather than simply sitting on top.

Each new truck features full air suspension, with rear lift and steer axles, alongside a full working at height system and additional LED lighting for improved safety when loading and unloading. The decks also include four pairs of lashing points as standard, with the company opting for an additional four pairs of five-tonne D-rings to increase load flexibility and security.

Based out of the Blackwood Plant Hire’s Stewarton depot, the new rigids will deliver a range of plant, including diggers and excavators weighing up to 14-tonnes, to customers across the UK. On the road six days a week, the vehicles are expected to clock up around 150,000 kilometres per year.

Blackwood Plant Hire was established in 1960, primarily working in land drainage and agricultural work. In 2001 the business began to rapidly expand, and now supplies more than 300 pieces of plant to its extensive customer base, which includes national civil engineering, rail and utility construction projects.