On Saturday, September 8, 2019, Golden Ray capsized within Port of Brunswick harbour, shortly after unberthing and proceeding towards Port of Baltimore. The ship departed the dock in Brunswick shortly after midnight and had travelled only 23 minutes when it started to list to the port side and capsized. 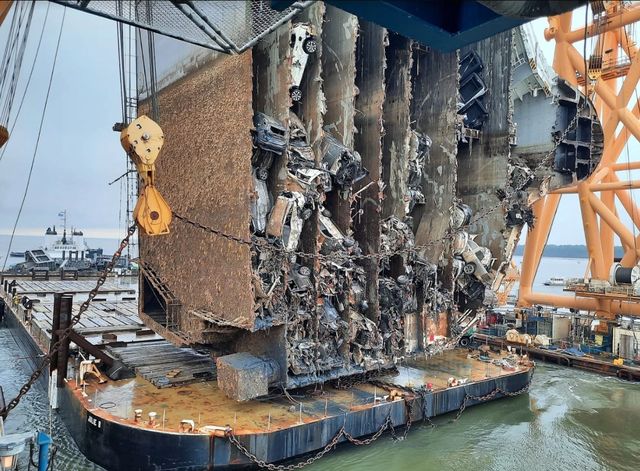 The crew of 23 and the port pilot were all rescued. Fast and decisive action by the pilot meant that the ship grounded in relatively shallow water and away from the main shipping approaches to the port.

The ship was carrying a cargo of brand new Kia and Hyundai cars along with other vehicles bound, eventually, for the Middle East. It is thought that 316 Kia Telluride SUVs, which are taller and heavier, may have affected the ships balance. The ship had also discharged a large amount of ballast water before entering into port, which could have counteracted the severe list the ship experienced. It was also discovered that the door by which the pilot entered the ship had been left open and allowed the ship to take on water.

Due to delays caused by bad weather and COVID-19, the first act of cutting the Golden Ray into 8 segments only happened recently and the bow section returned to shore for further dismantling.