Foresight Group is providing an initial £80 million in funding to CNG Fuels in a partnership to build a nationwide network of refuelling stations that will allow HGVs to run on carbon neutral fuel, the companies announced today. 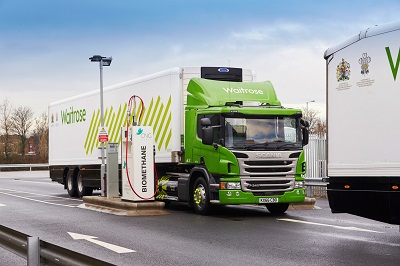 CNG Fuels opened its fifth refuelling station near Birmingham last week, and the funding will see it develop at least 14 further public access stations on major routes over the next two years, quadrupling the company’s capacity and enabling it to refuel 8,000 vehicles a day. They will make carbon neutral fuel available from Glasgow to Bristol, meeting growing demand from major brands eager to switch their high-mileage, heavily emitting HGVs away from diesel.

The company is the UK’s leading supplier of Bio-CNG (compressed natural gas), the lowest carbon, most cost-effective alternative to diesel for HGVs. The fuel is 35%-40% cheaper than diesel and cuts vehicle greenhouse gas emissions by up to 85%. It will gradually become fully carbon neutral from 2021 as the biomethane is increasingly sourced from manure, a heavy emitter of greenhouse gas.

Richard Morse, Chairman of JLEN, Foresight Group’s listed environmental infrastructure fund, said: “We are pleased to make this investment into biomethane refuelling infrastructure, helping to decarbonise one of the most emission-intensive parts of the transport sector. We consider that the two pillars of better environmental performance and lower cost operations for customers combine to support our investment case and we look forward to supporting the growth of a national biomethane refuelling network.”

Matt Hammond, Partner at Foresight Group, said: “Foresight is delighted to be supporting and working with CNG Fuels.  It is very pleasing to see attractive investment opportunities right across the sustainable infrastructure sector and that our investments have real impact in the decarbonisation of the transport sector.”

Foresight Inheritance Tax Fund and JLEN Environmental Assets Group Limited, Foresight Group’s listed environmental infrastructure fund, have provided the initial £80 million funding line for a joint venture with CNG Fuels. It follows the launch of the UK Government’s ten point plan for a green industrial revolution, which included the proposal of a consultation on the phase-out of new diesel HGVs to put the UK in the vanguard of zero emission freight.*

HGVs account for 4.5% of total UK greenhouse gases**, so decarbonising the sector is essential to meet the UK’s goal of achieving Net Zero emissions by 2050. Bio-CNG is the leading commercially available solution at scale to reduce these emissions. Fuel duty on biomethane is lower than on diesel and the government has committed to maintain a clear advantage for gas-powered vehicles until 2032.

Baden Gowrie-Smith, Chief Financial Officer of CNG Fuels, said: “We expect the number of CNG trucks on UK roads to double in 2021 as fleet operators take action to support the government’s Net Zero targets. This exciting partnership with Foresight demonstrates their enthusiasm for biomethane as a solution to decarbonise heavy transport at scale, and the near-term development of more stations will enable us to serve our customers even better by delivering carbon neutral Bio-CNG nationwide. We hope this will give even more brands the confidence to switch from diesel.”

CNG Fuels is already able to supply 2,000 vehicles a day from its five public access refuelling stations, and a sixth station at Knowsley, near Liverpool, is due to open in January. Its newest station, close to the M6 at Erdington, east of Birmingham, can refuel up to 500 HGVs a day and will support a virtual pipeline, using gas trailers to supply the John Lewis Partnership’s depot at Magna Park, near Milton Keynes.

CNG Fuels has secured a pipeline of development sites on major trucking routes to serve fleet operators throughout Great Britain. Stations due to open next year include major trucking hotspots such as Eurocentral, near Glasgow, Milton Keynes, Avonmouth and Wakefield.

100% of the fuel supplied by CNG Fuels is renewable and sustainable biomethane, approved under the Department for Transport’s Renewable Transport Fuel Obligation (RTFO) scheme. It is delivered to stations via the existing gas grid where it is compressed into fuel. Low processing, transportation and electricity costs make it a low-cost, clean solution.

Bio-CNG is currently sourced from food waste but CNG Fuels is securing supplies of gas derived from manure to create a fuel that will be carbon neutral overall.  It expects to introduce carbon neutral biomethane across all sites in 2021 at the same price.

Manure gives off methane, a greenhouse gas 28 times more powerful than carbon dioxide.*** Using methane as an HGV fuel prevents it from going into the atmosphere and reduces overall emissions. The EU’s revised Renewable Energy Directive (RED II) recognises biomethane from manure as a carbon negative fuel,**** and the UK is expected to adopt it in 2021 regardless of Brexit.

Ernst & Young LLP acted as financial adviser to CNG Fuels in connection with the transaction and the structuring of the investment from Foresight.

*** The global warming potential of methane is 28-36 times greater than CO2 over 100 years – US Environmental Protection Agency.

**** 103 grammes of CO2 are saved for each megajoule of energy generated by biomethane derived from manure, if methane is not allowed to escape in the process. Renewable Energy Directive II, p118.