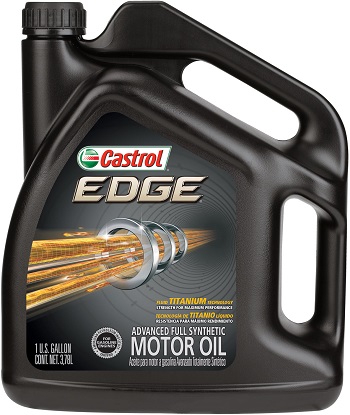 Castrol, one of the world’s leading lubricant companies, has today revealed new performance benefits of using Fluid TITANIUM Technology after years of research, development and groundbreaking testing. Castrol EDGE can unlock more engine performance by reducing performance robbing friction by up to 20 percent.

Castrol EDGE, which has been under constant research and development for more than a decade, is specifically designed to address the issue of performance robbing friction in engines – a problem that is on the rise as engine sizes shrink and the acceleration of vehicle technology increases performance demands.

As pressure within the engine intensifies, so does friction, wasting up to 10 per cent of engine performance. With 32,000 contacts per minute within an engine*, every day there are millions of opportunities for friction to impact the performance, and lifespan, of an engine. Castrol EDGE with its innovative Fluid TITANIUM Technology physically transforms under pressure; its molecular structure changes to temporarily create a solid cushion between engine surfaces. In doing so, the lubricant reduces performance robbing friction by up to 20 per cent, unlocking true engine performance.

Dr Rebecca Yates, Product Development Director at Castrol explains: “Put simply, friction is the enemy of engine performance. As innovators, we set out to find a formulation that would begin to tackle the ever-growing problem of engine friction – and with this Castrol EDGE formulation, we believe we have made more progress towards that than any other lubricant on the market. Our Castrol EDGE range with Fluid TITANIUM Technology goes above and beyond what previous lubricants have achieved to deliver a notable improvement for drivers.”

Castrol has pushed the boundaries of testing methods to explore how additives react within lubricants under the highest pressures. It has worked with the University of Edinburgh to create a completely new and unique testing process, using a high-tech Diamond Anvil and synchrotron – the first and only test of its kind in the lubricants industry. Exerting extreme pressures using diamonds has shown scientific evidence of the changing molecular structure of Castrol’s Fluid TITANIUM Technology.

The lubricant undergoes the same physical transformation in the face of engine pressures. Its molecular structure changes from a fluid into a temporary physical structure to resist pressure on parts of the engine, most notably the cam shaft. When the pressure is released, Castrol EDGE reverts to be a fluid again.

Dr Rebecca Yates continues: “This formulation is rooted in tribology. From the additives that we have selected, to the creation of Fluid TITANIUM Technology and the robust testing process that this product has been through, high-pressure chemistry is at its core. Castrol EDGE with Fluid TITANIUM Technology can confidently say that it reduces performance robbing friction by up to 20 per cent, the greatest advancement of anti-friction lubricant currently in the market.”

Castrol is committed to continually innovating its lubricants, and the benefits offered by its premium, fully synthetic Castrol EDGE range with Fluid TITANIUM Technology proves the value of the company’s multi-million-pound investment in R&D.