Ford Takes to the Road to Raise Awareness of Mental Health 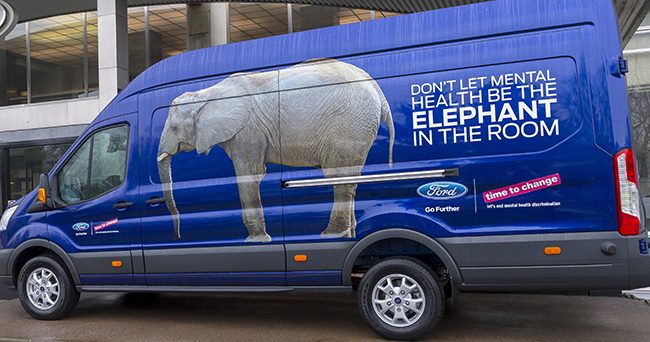 To mark Time to Talk Day Ford is adding ten “Don’t let mental health be the elephant in the room” liveried trailers to its UK transport operations. Travelling thousands of miles a year, the specially designed trailers will act as “mobile billboards” to raise awareness of the Time to Change campaign to end mental health discrimination.

Around one in four people in the UK experiences mental health problems with young men, in particular being identified as a vulnerable demographic. Only a third of men (34 per cent) would talk openly about their feelings, while just under one third (31 per cent) said that they would be embarrassed about seeking help for a mental health problem.1

Last year Ford partnered with *Time to Change, producing a national awareness film promoting the front seat of a vehicle as a safe space to talk after research, conducted by Ford, found that over two-thirds (67 per cent) of people said they were more comfortable talking about issues when in a vehicle.

“One in four of us go through mental health issues at some point in our lives, so it really affects everyone, be it through personal experience or through people we know,” said Ford of Britain chairman and managing director, Andy Barratt. “As the market-leading car and van brand in the UK, Ford is an important part of society and we want to use that relationship to reach as many people as possible and encourage them to talk about mental health.”

“We’re delighted that Ford continues to be committed to improving attitudes towards mental health,” said Director of Time to Change, Jo Loughran. “We’ve come a long way in recent years but still, too many people with mental health problems are made to feel isolated, worthless and ashamed. Time to Talk Day is an opportunity to break down barriers and have real and meaningful conversations about mental health – however you do it. As Ford’s public awareness film highlights, talking about mental health doesn’t have to be the elephant in the room.”

Time to Change is an established mental health campaign run by the mental health charities’, Mind and Rethink Mental Illness, with the aim to reduce the stigma surrounding discussions on mental health