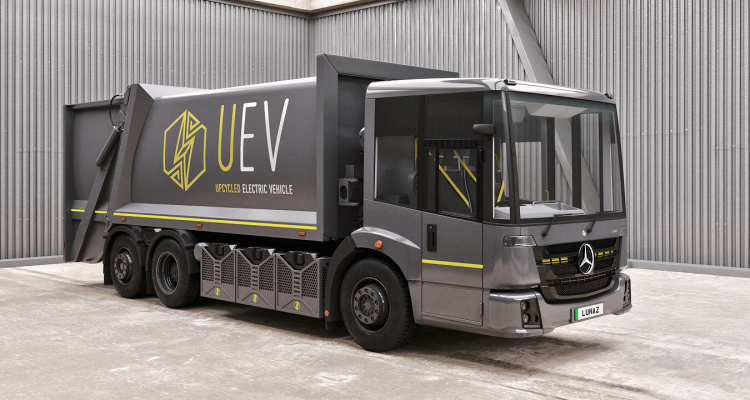 Ahead of a landmark nationwide roll-out of industrial upcycled electric vehicles (UEVs), Lunaz Applied Technologies (LAT) reveals its earliest and most ambitious design and powertrain requirements. Following a preliminary development phase, which consumed a total of 240 collective years of intensive development by the brand’s engineering and design functions, LAT has met every target outlined in the illustration, in doing so creating the world’s first UEV recycling truck.

These critical vehicles, which are based on the Mercedes-Benz Econic platform, are cleaner, cheaper and better equipped than their all-new battery electric counterparts. Following the significant inflow of government contracts, these UEVs will be operating recycling collection routes for several councils, including a number of London boroughs. 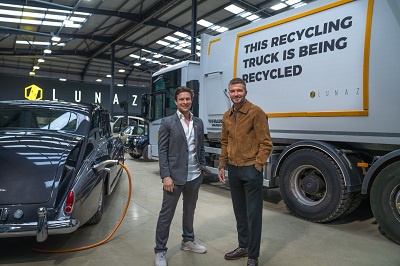 Like the historically significant vehicles reimagined by Lunaz Design, UEV recycling trucks will save millions of tonnes of embedded carbon from landfill. An independent environmental audit commissioned by LAT confirmed that more than 80% of embedded carbon over total lifetime is saved when upcycling rather than replacing an existing refuse truck with a new EV equivalent. Repurposing these end-of-life vehicles into UEVs that are cleaner, less expensive and better-equipped than their all-new equivalents supports the urgent requirement for fleet operators and governments worldwide to reach carbon neutrality.

This early render reveals what can be achieved by applying Lunaz’s in-house upcycling expertise on an industrial scale: a 5,162lb ft powertrain fed by batteries that can not only be replaced individually in less than ten minutes but comply to the same rigorous safety standards as the latest EV road cars; between 275kwh and 400kwh of battery capacity for varying route lengths; advanced thermal management that improves range by up to 25%; and proprietary technology that allows these vehicles to not only manage low-speed torque demands but also deliver higher cruising speeds, preventing congestion that can be caused by these vehicles.

Equally, the same meticulous ergonomic, material and safety considerations that each Bentley and Rolls-Royce by Lunaz Design benefits from have been applied to the interior of each LAT UEV. Following significant primary research, including participation in several recycling collection rounds close to the recently expanded Lunaz UEV campus in Silverstone, England, safety, comfort and connectivity improvements were made to each UEV, bettering not just the product but the safety and wellbeing of the driver and crew who operate it.

A first-principles approach was taken when appointing the cabin for UEV drivers and crews. These frontline workers, who are the backbone of this critical service, were given a considerable share of voice as consultants in material selection and ergonomics. They stated that the middle seat of the three-abreast cabin was not sufficiently comfortable. LAT responded by dramatically improving comfort across the entire cabin environment.

LAT UEVs subsequently use seat padding materials carried over directly from Lunaz Design’s upcycled Bentleys and Rolls-Royces. Likewise, the vinyl seat covering of the end-of-life vehicle is replaced with a hard-wearing but Greenguard Gold, HPD and EPD compliant textile that the Lunaz Design team first encountered during a design reconnaissance trip to the W Hotel in Osaka, Japan, where it was used to cover seating. 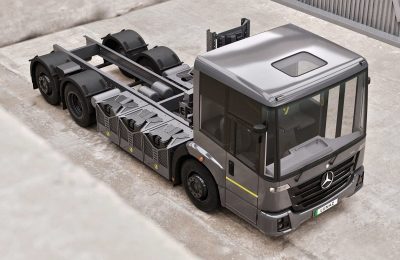 In response to further feedback from drivers and crew, cup holders were added for all vehicle occupants, not just drivers, and a shelf was provisioned for wireless and USB device charging, along with a device storage cubby. To support the recyclability and circularity of the UEV, a mounting bar was added across the dashboard for simple removal and refitment of fleet management hardware, avoiding the requirement to drill into the dashboard to fit these devices, in doing so increasing the forward recyclability of the instrument panel component.

A camera monitoring system also dramatically improves driver awareness. Two assemblies containing three cameras are mounted on the top corners of the UEV, feeding digitised rear-view mirrors. The 14-inch screens that replace the mirrors display not just the rear and blind spots around the UEV but what’s directly in front and below the vehicle, via a dedicated downward-facing camera. The screens also feature object detection, highlighting cyclists, pedestrians and potential hazards to the driver. Unlike standard mirrors, these operate under all conditions, including rain, snow and total darkness, dramatically increasing safety.

Fleet operators were also key consultants in the development of LAT UEVs. A regular challenge was understanding from afar how much fuel remained in each vehicle. LAT overcame this with the fitment of state-of-charge LED lights in the front grille, enabling operators to instantly determine which vehicle is ready to use from up to 200 metres away.

Despite these highly considered appointments, and the fact that an LAT UEV is warrantied as new, it costs less than a new electric-powered refuse truck, while significantly improving the safety and wellbeing of those who operate it.

LAT UEV products represent a rare balance in the clean-air technology space – providing industrial vehicles that are cleaner, cheaper and better equipped than any as-new alternative. As such, the company’s growth has attracted significant interest from investors.

LAT’s ongoing success is built on the foundations of a highly strategic investor base. Together they have competencies and interests across the globe and across relevant sectors, including engineering, logistics, media, technology and investment banking. This includes Frederic Wakeman, who following a successful tenure on Wall Street with The Bank of New York and GE Capital, became a Managing Partner of Advent International, one of the largest and most experienced global private equity firms.  He is now a private investor and strategic advisor in the sustainability space as well as an active philanthropist, supporting projects where climate, nature and people intersect. He adds to a group that also includes the Reuben, Barclay and Dallal families, David Beckham and US-based Brendan Iribe, co-founder and former CEO of Oculus VR, which was acquired by Meta, the parent company of Facebook, in 2014.

“When we embarked on the Lunaz journey in 2018, it was our mission to upcycle internal combustion engined vehicles of all kinds into clean-air solutions – from Rolls-Royces to refuse trucks. Lunaz Applied Technologies (LAT), a separate arm under the Lunaz brand, began with a rendering of a recycling truck. This outlined not just an incredibly ambitious technological vision for an upcycled electric vehicle (UEV) but a wish list expressed to us first hand by the people who operated them, from service engineers and fleet managers to drivers and crew. I am delighted to confirm that the vision outlined in this rendering has been met across the board and that LAT UEVs will begin their nationwide roll-out imminently.

“In upcycling these end-of-life internal combustion engined commercial and industrial vehicles with our electric powertrain, LAT UEVs are cleaner, less expensive and better equipped than their all-new equivalents. In addition, they are far quieter than their ICE counterparts. These critical vehicles save thousands of tonnes of embedded carbon from landfill and represent a meaningful contribution to private businesses and governments as they strive towards carbon neutrality. Recycling trucks are just the beginning for the Mercedes-Benz Econic platform.” David Lorenz, Founder, Lunaz