A year in review: The wackiest things to damage windscreens in 2016 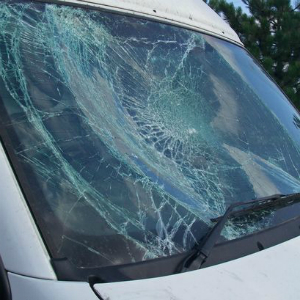 Autoglass®, the UK’s leading vehicle glass repair and replacement company, has asked customers to reveal the wackiest things to damage their windscreens in 2016 and there were some downright unfortunate responses.

2016 has been a year full of the unexpected; from the lovers spat which resulted in a plant pot crashing through a windscreen, to the peculiar array of projectiles and damage-causing debris including bouncing onions, innocuous tiny sweets and a coconut.

Here’s this year’s top ten list of the weirdest things customers of Autoglass® said were the cause of windscreen chips and cracks in 2016:

This year’s data revealed that the most common cause of unexpected damage is stones and loose road surfaces (29%), with many screens falling victim to chippings from roadworks. This is followed by general mishaps (25%), ‘mysterious’ cracks which appear without warning often due to temperature changes (16%), animal-related damage (15%) and relatively rare occurrences of vandalism (5%).

General mishaps came in a variety of shapes and forms this year and were often avoidable:  Ranging from people who shattered their screens by slamming the boot closed on large flat-pack furniture, kayaks or surfboards, to those who underestimated just how good their golf swing was, as well as the cars that became the targets of misdirected fireworks. To keep your vehicle intact it is important not to be too optimistic about the amount of space in your boot. Gardening mishaps also appear to be on the increase with many lawn mowers flicking up trouble.

“In these winter months, motorists need to be extra careful on the roads and with their vehicles.  Take time to defrost screens correctly; rushing this process using the wrong tools or pouring water straight from the kettle can cause damage that can cost more time and money to rectify. Be sure to defrost thoroughly before setting off so visibility isn’t restricted – as our data shows there are plenty of hazards out there!

Every windscreen chip will eventually become a crack, so it’s important to get them fixed right away.”

Autoglass® top tips for getting your car ready for winter: