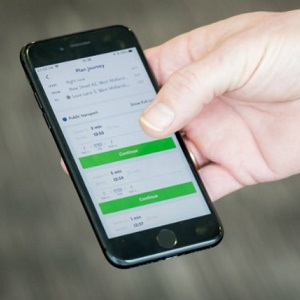 Whim, the Spotify of the transport world, today unveiled its revolutionary packages and pricing ahead of Thursday’s grand launch across the West Midlands.

Transforming the way people use public transport in the region and backed by organisations including Transport for West Midlands (TfWM), Mayor Andy Street and the West Midlands Combined Authority (WMCA), Whim will offer Midlanders three options:

Now Whim is looking for the first 500 people to sign up to the scheme and will bring a three-storey house the size of a parking space to the centre of Birmingham to underline its message of what can be achieved when you take cars off the streets.

Whim founder Sampo Hietanan said he was excited to be bringing Whim to the West Midlands.

“We want to challenge the way people start to think about their journeys and let them see that vehicle ownership doesn’t have to be the only way forward. Whim offers a smart alternative for smart people,” said Mr Hietanan.

“On average, cars are parked up unused for about 96 per cent of their lifetime – but we still have pay for them, sometimes in conjunction with other transport options too. Owning a car is actually a burden for many people but there’s been no realistic alternative until now.”

The award-winning Whim app, which dovetails with the Swift travel card, delivers smart travel solutions to fit in with the way you lead your life – a bus, tram or train to and from work; perhaps a taxi after a night out; and what about a hire car for those weekend trips to the countryside?

National Express, Gett Taxis, Enterprise Rent-A-Car, nextbike and other transport providers have already signed up to the scheme with others lined up to get involved.

Often dubbed as the Spotify or Netflix of the transport world, Whim integrates journey planning, reservations, payments and subscriptions into one app.

Mr Hietanen continued: “We like cars, we’re certainly not anti-car, and we still offer access to cars when needed, via taxis or through hire. But we are showing people that they don’t need to be so reliant on car ownership. Once people realise this, the benefits are huge – less traffic, less pollution, less stressful journeys, more space in our towns and cities thanks to fewer cars parked on the road.

“Whim will also reward people for greener, healthier options such as walking more and having car-free days. People will also soon start to realise the positive health benefits of walking a little more and driving less – not to mention the time and money freed up by not having to maintain a car or having to sit behind the wheel in a traffic jam. It just makes more sense.

“When we launched in Helsinki, we found that people were ready for this kind of service, there is a clear demand.

“We’re confident the West Midlands is a great place for us to launch Whim for the first time outside Finland. We’ve been very positively received and it’s been very clear from the start that the area is dynamic and open to partnership working and innovation,” he added.

Finnish-owned Whim is the world’s first and only monthly mobility service and already operates successfully in Helsinki, where it has 20,000 registered users. It aims to expand to Antwerp and Flanders, in Belgium, later in 2018. Negotiations are also ongoing in the Netherlands, Austria, Canada, Singapore, and several other markets.

Commuters using Whim will be able to access a number of different modes of public transport including buses, trams, taxis and hire cars, either as part of a monthly fee or on pay-as-you-go.

People will also have full access to the new 5,000-strong fleet of nextbike bike-share cycles that were announced for the Midlands last month.