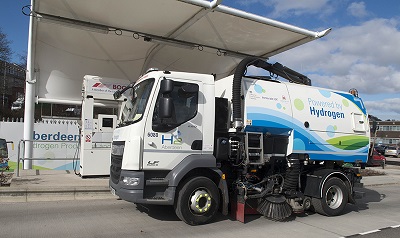 In total, more than 100 HGVs – including refuse collection vehicles, road maintenance trucks, road sweepers, tippers and tankers – will all be protected by the Wheely-Safe TPMS product.

Andy Congrave, Sales Director at Wheely-Safe, says: “We had really good feedback from Aberdeen City Council regarding the Wheely-Safe TPMS they fitted to more than 200 of their smaller vehicles last year, and were very happy they came back to us to protect their HGV fleet. It’s proof the technology is performing well for them.

“We know the benefits our system can bring to operators. It is simple to set up and will help reduce fuel bills, improve tyre life and maximise safety across any fleet.”

The latest generation Wheely-Safe TPMS can be installed within minutes. It sees specially designed sensors replace the tyre valve caps and auto-pair with an in-cab receiver, that warns the driver of any issues.

The TPMS sensors send maintenance alerts if there is a 15 per cent drop in pressure, or critical low-pressure warnings if the pressure drops by 25 per cent or more, or in the event of fast leakage (at least 2 psi per minute). The same sensors also monitor the temperature of the air inside each tyre and send early high temperature warnings at 85ºC, and critical warnings at 100ºC – often the sign of an impending blowout.

The system also comes with handheld sensor readers, allowing drivers or vehicle technicians to obtain accurate tyre pressure readings in a matter of seconds – without the hassle of connecting a pressure gauge to the valve, which removes air and is unhygienic.

Aberdeen City Council’s HGV fleet will have a ‘Wheely-Safe fitted’ vinyl graphic applied to show they have been protected by the technology. Wheely-Safe makes a donation of £10 to Brake for every customer vehicle featuring the sticker, as part of an ongoing deal with the road safety charity.