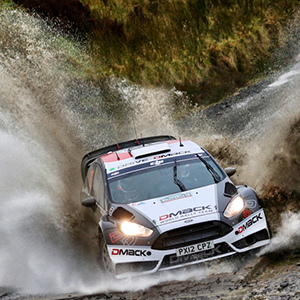 As Wales declares 2017 as its ‘Year of Legends’, few events will epitomise that status better than Dayinsure Wales Rally GB (26-29 October), Britain’s revered round of the FIA World Rally Championship.

Indeed, this autumn’s eagerly-anticipated event – the competitive route for which is announced today (Wednesday) – is all set to be one of the most exciting, appealing and unmissable in the rally’s long-running history.

Fuelling the excitement is a new generation of dramatic WRC rally cars which are delivering one of the most unpredictable and fiercely-fought championships in living memory. This season’s first six rounds have produced no fewer than four different winners and the nail-biting title race is likely to have entered a critical phase come the penultimate round here in Britain at the end of October.

There’s strong British interest, too. Back in March, Kris Meeke won in Mexico and the Ulsterman has twice previously been on the podium in Wales. More recently, local Welsh hero Elfyn Evans came within a split-second of winning his first WRC round in Argentina in April.

Last year’s move to an earlier date in October not only delivered better autumnal weather conditions for crews and spectators but also coincided with schools’ half-term break giving many families the chance to enjoy some top class, world championship entertainment over the holiday period. With a similar date in 2017, accompanied children aged 15 and under are again offered free admission to all the ticketed Special Stages.

The majority of these thrilling speed tests will be run against-the-clock on demanding gravel roads set in the legendary Welsh forests. However, adding to challenge and spectacle, the modified 2017 route reintroduces the thrill of two-night stages in the daunting Dyfnant and Aberhirnant forests run after dark on Saturday evening.

Saturday’s schedule also includes a return of the family-friendly RallyFest at Cholmondeley Castle. Its introduction was one of the many highlights of last year’s Dayinsure Wales Rally GB with 10,000 visitors enjoying a full day of memorable entertainment, culminating in the mid-afternoon arrival of the WRC stars and cars – a hugely successful format that will be further enhanced in 2017.

In total, the 20 Special Stages offer in excess of 300 competitive kilometers (180 miles) with a fast-moving schedule featuring many of the established Welsh classics: mythical names such as Hafren, Myherin, Dyfi and Gartheiniog are all included.

The premier league WRC teams again will be based at the Deeside Rally Village, on the grounds of the Toyota UK engine manufacturing plant. While admittance to the Rally Village is totally free, tickets for the gripping action are now on sale, with savings for those booking in advance compared to on-the-day.

Since relocating to Deeside in 2013, this world-class sporting spectacle has gone from strength-to-strength. Last year it attracted more than 90,000 visitors, an impressive 150 car entry, international crews from 24 different countries and delivered almost £9m of economic benefit to the Welsh economy as well as extensive global TV and media coverage.

The 2016 event also welcomed a new title partner – Dayinsure, one of the UK’s leading providers of temporary vehicle insurance – as well as on-going support from Conwy County Borough Council. Such was the success of these two affiliations that Dayinsure has recently announced a title partnership extension for the next two years while Conwy has renewed its role as official Host County for 2017.

As a result, several of the exhilarating competitive stages are set in Conwy County’s famous forests while the event’s high-profile Ceremonial Start and Ceremonial Finish will take place in the county.

For the past four years, top honors have gone to the reigning world champion Sébastien Ogier and now the Frenchman stands on the threshold of making history as no driver has ever clocked up five Rally GB victories. An unprecedented fifth win would indeed create a new ‘legend’.