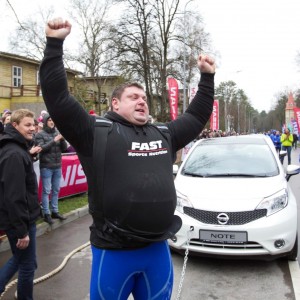 Zydrunas Savickas is the new Guinness World Record holder for the ‘Most Cars Pulled By One Man’ after towing 12,941kg-worth of Nissan Note.

The 1.91m, 170kg strongman had only one attempt to set the new record, which was recorded at the Lithuanian Car of the Year test camp in Druskininkai.

Savickas said: “It is always great to set a new record, once I got into my stride pulling the 12 Nissan Notes was fine.

“Obviously, a big thank you to Nissan for helping me set the record and making it all possible.”

It is the second time this year that Nissan has entered the record books.

In August, Nissan helped the Electric Vehicle Union and the Norwegian EV Association set a new Guinness World Record when 260½ electric vehicles were driven in unison.

Taina Erkkila, Communication Director of Nissan Nordic Europe, said: “We at Nissan like setting records and are always aiming high.

“Today we are delighted to have been able to help Zydrunas set another world record and to see so many people turn out to support him; it was a great way to mark the end of the Lithuanian COTY camp.”