Watch this car drive more than 18,000 miles in temperatures as low as minus 35 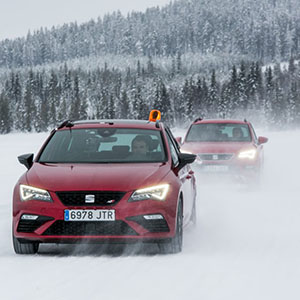 A manufacturer has driven its new car more than 18,000 miles in temperatures as low as minus 35 – only stopping to refuel and change driver. Seat has released a video giving a fascinating demonstration of the extreme tests a new model goes through.

Every season, the Spanish car firm takes a team of 150 technicians and engineers to Lapland for four months of strenuous testing. With snow blizzards and temperatures as low as minus 35, they then drove the Ateca FR 18,600 miles non-stop. It was the equivalent of travelling from Perth in Scotland to Perth in Australia and BACK, with the car only stopping for refuelling and driver changes.

The mammoth journey – which is more than twice the distance the average Brit drives per year – was one of 60 tests carried out near the Arctic Circle on the Ateca FR to ensure it is perfectly set-up before hitting the roads. Test drivers took the Ateca FR’s grip to the limit by thrashing it around a frozen lake where part of the surface was polished less than another. Traction control was disabled at different stages which allowed technicians to examine the Ateca’s electronic stability control (ESC). If the vehicle veers off course, the ESC system would then kick in and correct the vehicle’s direction of travel.

Seat also honed the Ateca’s high-tech braking system by using a 200 metre track with two different surfaces. Part of the lane was heated to 10 degrees to prevent the asphalt from freezing, while the other is cooled to minus 16 degrees to preserve the ice. This test helps engineers calibrate the ABS system, a driver aid which controls vehicle stability in the most extreme conditions.

The driver and a second technician also spent time detecting noises which can be annoying to the driver and passengers. When it is freezing cold, some of the car’s 3,000 parts can contract and cause noises when they come into contact. They then analyse the noises by driving over several kinds of surfaces at different speeds.

The Arctic Circle location, where 90 Seat vehicles were tested, gave the car firm the perfect opportunity to evaluate its cars’ performances before they arrive to the market.

Gonzalo Gimenez Lardies, responsible for the brakes department and ESC systems, at Seat, said: “The behaviour of the car must be guaranteed in cold temperatures. “That means all systems are working properly in all weather conditions, including snowy and icy surfaces. All this testing is more necessary than ever due to the integration of increasingly complex electronic systems.”

You can watch the video here with pics here