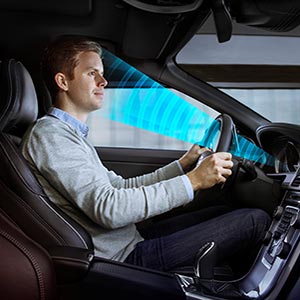 Technology which recognises and distinguishes whether a driver is tired or inattentive is being developed by Volvo.

The cutting-edge innovation, which includes a system which detects closed eyes or what the driver is looking at, could hit vehicles within the new few years.

Sensors on the dashboard allow the possibility of developing precise safety systems that detect the driver’s state and adjust the car accordingly.

This means the car will ensure it does not stray out of the lane or tailgate, and awake a driver who is falling asleep.

Small LEDs illuminate the driver with infrared light, which is then monitored by the sensor.

Infrared light is just outside the wavelengths that the human eye can see, which means that the person behind the wheel cannot notice it at all.

“Since the car is able to detect if a driver is not paying attention, safety systems can be adapted more effectively.”

Per Landfors, Engineer at Volvo Cars, said: “Since the car is able to detect if a driver is not paying attention, safety systems can be adapted more effectively.

“For example, the car’s support systems can be activated later on if the driver is focused, and earlier if the driver’s attention is directed elsewhere.”

Driver sensors are also opening up other possibilities, Volvo claim.

By monitoring eye movements, the car would be able to adjust both interior and exterior lighting to follow the direction in which the driver is looking.

The car would also be able to adjust seat settings, for instance, simply by recognising the person sitting behind the wheel.

Sensor technology is already installed in test vehicles, with Volvo also conducting research with several partners including to identify effective methods for detecting tiredness and inattention.