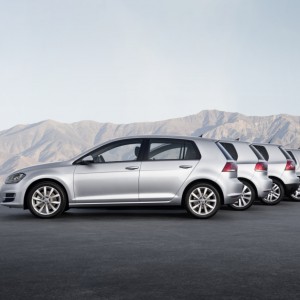 RECORD: Generations of the VW Golf

Volkswagen are celebrating a bumper week after producing a record-breaking 30millionth Golf – and scooping Car of the Year for the same vehicle.

The German manufacturer’s Wolfsburg plant rolled out the landmark-busting car, a new production record for the most successful European car in history.

A TDI BlueMotion, the 30millionth vehicle was a recently-introduced model with a fuel consumption of just 88.3mpg – making it the most efficient Golf ever.

The feat means that since production of the original in 1974, an average of more than 2,000 people have purchased a Golf every day.

To add to Volkswagen’s celebrations, Professor Martin Winterkorn, Chairman of the Board of Management at Volkswagen AG, yesterday officially accepted the “Car of the Year 2013” award for the Golf.

The award was conferred by a 60-member international jury, and Professor Winterkorn was overjoyed with both events.

“With technologies such as the safe front-wheel drive of the first Golf, the debut of the TDI in the third Golf, ESC (Electronic Stability Control) and the dual clutch gearbox of the fourth Golf and the standard Automatic Post-Collision Braking System of the new generation, this car has continued to democratise progress.

“An optimum of safety, comfort and driving fun are no longer a question of money thanks to the Golf.

“And so our bestseller lives up to the Volkswagen name.”

The 30millionth production will be on display for employees of the Wolfsburg plant on Saturday at the plant’s open day.