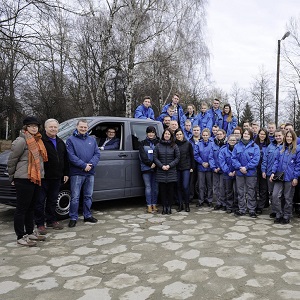 Volkswagen has donated a Volkswagen Transporter to the International Auschwitz Committee (I AC) and is therefore supporting the cooperation with the IAC for the preservation of the Memorial Site at the former Auschwitz concentration camp and Auschwitz-Birkenau extermination camp which has continued for 30 years.

Vice-President Christoph Heubner (third from right) handed the Volkswagen commercial vehicle over to the Memorial Site in the Polish city of Oświęcim today. The Vice-Director of the Memorial Site Andrzej Kacorzyk (at the steering wheel) officially commissioned the vehicle in the presence of employees of the Memorial Site and apprentices from Volkswagen. Kacorzyk said: “We are very grateful to our partner Volkswagen for this donation. This van will be ideal for our restoration work.”

Heubner reported: “At the Auschwitz-Birkenau Memorial Site, the foundations of former detention huts are now being excavated to protect them against rain and groundwater. Young Volkswagen employees from Germany and Poland as well as Polish vocational school students are participating in this work.”

The initiative that started in December 1987 with a seminar for apprentices from Wolfsburg in Auschwitz has since brought more than 3,000 young Germans and Poles to the Youth Meeting Center in Oświęcim (Poland). Together, the young women and men from the two countries help to preserve the Auschwitz Memorial Site. They clear weeds from pathways, repair barbed wire fences, restore the enamel crockery of the victims and talk to eyewitnesses who survived Auschwitz concentration camp and Auschwitz-Birkenau extermination camp. The Memorial Site is a UNESCO World Heritage Site.

The International Auschwitz Committee (IAC) was founded in 1952 by survivors to ensure that Auschwitz would not be forgotten. The committee includes organizations, foundations and Holocaust survivors from 19 countries. Information on the committee is available in English, French, German and Polish at www.auschwitz.info.

About 1.5 million people were murdered by the Nazi regime at Auschwitz concentration camp and the extermination camp Auschwitz-Birkenau. The Red Army liberated the few survivors on January 27, 1945.