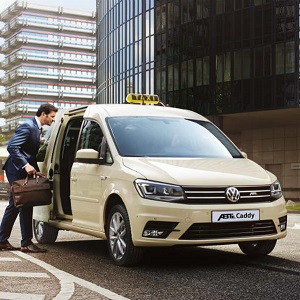 If you’re looking for a new van for urban deliveries, then check out the new Volkswagen Commercial Vehicles all-electric ABT e-Caddy.

It launches mid-2019. With zero-emissions the ABT e-Caddy has a range of over 130 miles – ideal for urban deliveries.

The new ABT e-Caddy was launched as a spacious taxi for five people plus luggage at the Hannover Show (September 19-27, 2018). But it will also be a panel van.

The drive system for the ABT e-Caddy was developed by ABT e-Line GmbH.

The 1ABT e-Caddy will launch as a Caddy Maxi with a cargo volume of 4.2 cu m. Its maximum payload will be 635 kg.

The ABT e-Caddy can be configured as a commercial vehicle panel van (no windows at rear) and kombi (with rear windows) – or as a passenger carrying vehicle.