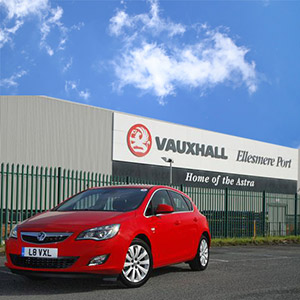 In the first significant new-hire programme for a decade, Vauxhall has confirmed that it will take on 550 new employees at its manufacturing sites in Ellesmere Port and Luton.

Planned for early 2015, as sales volumes build, around 300 new jobs will be secured at the Ellesmere Port plant in Cheshire, supplementing the current two-shift operation.

In 2012, its impact running into the next decade, Ellesmere Port won the £125 million investment contract to build the next generation, all-new Astra, scheduled to enter production in late 2015.

Also looking forward to a bright future is Vauxhall’s Luton plant, where a second shift is to be added in January 2015, creating around 250 new jobs.

The Luton facility builds the recently launched all-new Vivaro van, following success in 2011 when the £185 million investment contract was secured to build the new vehicle.

Tim Tozer, Chairman and Managing Director at Vauxhall, said: “This is great news for Vauxhall and for British manufacturing.
“Both of our UK manufacturing plants have won long contracts with all-new product and as the business strengthens, we now need to take on more people to build these exciting new Vauxhalls.”