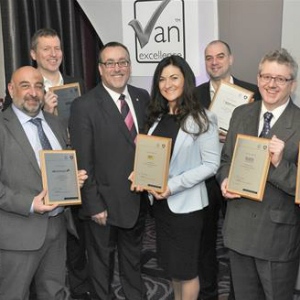 The Freight Transport Association’s 2016 Van Excellence Operational Briefings sponsored by Mercedes-Benz Vans got under way this week with events taking place in Nottingham and Weybridge.

High on the agenda at this year’s briefings is the way drivers’ actions can impact on how a fleet operation works, the ramifications – often serious and sometimes catastrophic – of something going wrong, and how putting the correct strategies and processes in place can improve the way they work and the image of the van driver in the UK.

In recognition of their unstinting support in promoting Van Excellence to all sectors of industry, the Van Excellence Gold Partners ARI, ATS Euromaster, Bott Ltd, Hertz Van Rental, Lex Autolease and TomTom Telematics were presented with plaques to announce their new status at the briefing in Nottingham on Tuesday (5 April).

Stephen Turner, Sales Director for Bott Ltd said:  “We’ve worked with the Van Excellence scheme since launch – for us, becoming a Gold Partner is a natural next step in our relationship. At Bott, we work closely with vehicle operators to drive standards in the industry and we fully support the FTA’s work in establishing a clear set of operating practices which have become the gold standard for van fleet operators. As well as supporting the scheme we also run a Van Excellence accredited fleet and can testify to the benefits of adopting the Van Excellence processes.”

Van Excellence Bronze and Silver Partnership grades will be announced later in 2016.