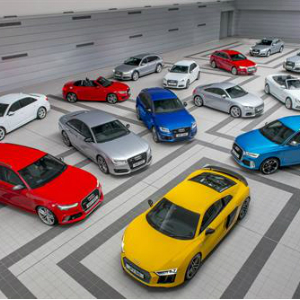 Audi UK has rounded off the first quarter of 2016 on a buoyant note with a sales result that not only confers number one premium brand status on the German car maker in passenger car retail terms but also establishes new domestic sales records not only for the quarter but also for the key month of March. A total of 47,380 Audi models found homes in the UK in the first three months of 2016, an increase of 5.5% on the same period last year. Of these, 30,483 sales were completed in the traditionally important plate change month.

As significant as the sector-leading total is the carefully planned route taken to reach it. It has remained true to the brand’s long-held ‘true premium’ operating philosophy, avoiding dependence on any single model line and entailing prudent management of the various supply channels.

Further evidence of the brand’s disciplined approach can be seen in the fact that quarter one has seen Audi consolidate its sales lead in retail and true fleet channels, the traditional indicators of brand health and desirability.

“In the wake of a record-breaking full-year sales figure in 2015 this latest result bodes very well for our continued growth in 2016 and beyond,” commented Audi UK Head of Sales Cian O’Brien.

“Our upward trajectory is being achieved organically by virtue of rising demand that isn’t centred on any one model. That demand is augmented each time we enter new segments with acclaimed new models, and is leveraged by the inherent strength of our distinctively premium brand image,” he added.

UK car production fell in September, with output down -5.0%, to register the worst performance for the month in 25 years,1 according to the latest figures published today

One of the UK’s best-known companies, British Gas’ heritage