Van Drivers Are On The Road To Good Health! 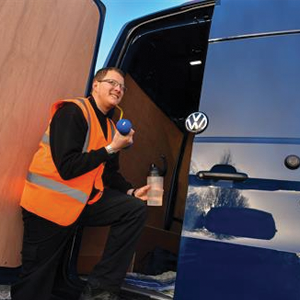 New research shows Britain’s van drivers are ditching their stereotypical lifestyle in favour of healthy eating and regular trips to the gym.

Despite the ‘white van man’ being labelled with a junk food-loving, exercise-shy image, many are now more likely to be found tucking into a healthy lunch and heading to the gym at the end of the day.

According to the research, the average van driver will work out twice a week, with more than one in 10 heading to the gym at least five times a week.

And instead of grabbing whatever they can on the go, one in seven will make their own packed lunch so they know exactly what they will be eating.

One in 10 also claims to eat a very healthy diet of fruit, vegetables and salad while on the road.

A spokesman for Volkswagen Commercial Vehicles, which commissioned the research, said: “This research seems to show that nowadays, van drivers are leading a much healthier lifestyle than you might expect. Rather than grabbing whatever they can while out on the road, they are tucking into homemade lunches of salad and fruit – a far cry from the food you might expect them to be eating.”

Researchers from Onepoll.com also found that four in 10 (41 per cent) of van drivers will swap sugary and salty snacks for salads and fruit as they try to eat as healthily as possible, despite being out and about for the majority of their day.

And more than three quarters do at least one form of exercise every week, with those in the West Midlands the most active, working out an average of three times a week. Scottish van drivers exercise the least.

It also emerged football is the sport of choice for 54 per cent of van drivers, but 29 per cent are more likely to be found watching or playing rugby. Almost one in five name golf as their favourite activity, with tennis, snooker and cycling also popular among van drivers. Twelve per cent even said scuba diving was a much-loved hobby.

It also revealed that many drivers claim to be more polite, patient and understanding on the road than the old ‘white van man’ stereotype would have you believe. In fact 39 per cent are concerned about the stereotype associated with the white van driver, while 27 per cent went as far as to say they think it’s unfair.

The research, which was commissioned by Volkswagen Commercial Vehicles, surveyed 500 van drivers across regions in the United Kingdom. Again, proving the ‘white van man’ image is outdated, 43 per cent of the respondents were women.

Six in 10 say they are courteous drivers and half claim to be polite and understanding, while 47 per cent have stopped to help road users who have broken down or been involved in an accident.

More than a quarter of van drivers tune into the sounds of Radio 2 when driving, with 23 per cent enjoying Heart and one in 10 listening to Classic FM.

And when it comes to hobbies and interests, 35 per cent enjoy reading and 28 per cent love cooking up a storm in the kitchen. Other popular hobbies include going to the theatre (22 per cent), collecting antiques (10 per cent) art or drawing (15 per cent).

Offering comfortable cabins with a host of features, from ergoComfort seats which protect against bumps in the road and support the spine, to drinks holders and driver alerts which recommend breaks when driving behaviour indicates tiredness, Volkswagen Commercial Vehicles always puts busy drivers first.

Other useful extras include a removable multifunction box for the front passenger seat, that offers storage and a cover which can be used as a table, and a multifunction front passenger bench seat which folds to create a table surface with integrated cup holders – perfect to eat that homemade healthy lunch out on the road!