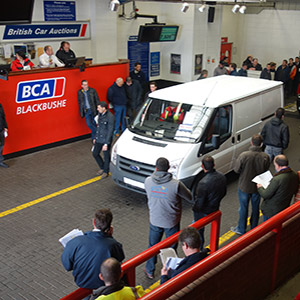 Values for all light commercial vehicles increased to £5,557 last month – a 3.9% rise (£212) compared to February – as buyer demand continued at exceptional levels.

Mileage decreased by around 3,000miles on average over the same period, with CAP performance improving by half a point.

“There can be little doubt that the improving economic background is giving a boost to the used LCV market.”

“LCV values have been universally strong throughout the first quarter of this year and are significantly higher than the same period last year.

“If anything, the market has been even more competitive over the past few weeks and well-presented LCV’s are routinely outperforming guide expectations – often by a considerable amount.

“The auction halls have been very busy across the BCA network, while the number of buyers participating via BCA Live Online continues to rise.

“There can be little doubt that the improving economic background is giving a boost to the used LCV market, particularly as demand increases from the building and construction industries.

“Small and medium-sized enterprises (SMEs) remain positive about prospects this year, but cashflow is a problem for some and that may impact any decision on replacing their workhorse vans.

“We expect demand to remain strong in April, but post-Easter, we know from experience that values typically soften over the late spring and early summer months.

“There are also indications from the Confederation of British Industry (CBI) that while the economy is still growing, the pace is slowing and this may be a factor moving forward.”

Year-on-year, values were up by a significant £1,142 (19.3%), as average values continued to race ahead in the light commercial sector.

Performance against CAP improved by more than a point to 103.21%, while retained value against Manufacturer Recommended Price (MRP) improved to 39.22%.