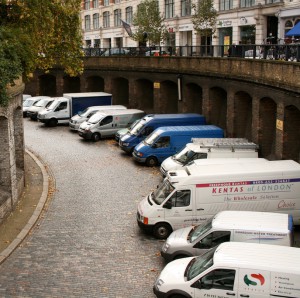 Commercial vehicle registrations in the UK grew by almost 30% in April compared to the same month in 2012, new figures show.

An overall April market growth of 29.5% was also complimented by an increase of 11.3% when comparing this year’s January to April figures to 2012’s.

The EU commercial vehicle market also grew overall in April (3.6%) – the first time since December 2011 – though there was a 7.6% drop in registrations in the January to April period.

Demand in the light commercial vehicle (under 3.5tonnes) market enjoyed a huge 43% UK growth in April, with January to April growth at 17.6%.

The same April market grew by 5.8% overall in the EU, though January to April registrations fell by 6.3%.

Finally, bus and coach registrations dropped by 18%, experiencing a January to April drop of 19.1%; however, EU registrations also dropped -3.1 and -6.4 respectively.

Image courtesy of Stephen Fulljames, with thanks.