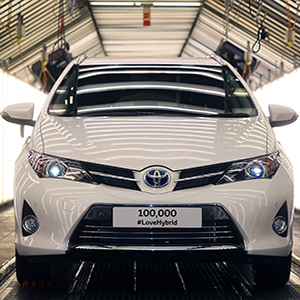 Toyota have passed the 100,000 mark for hybrid car sales in the UK.

The landmark car, which came less than 14years after the debut launch of the first Prius, was a British-built Auris Hybrid Touring Sports in range-topping Excel trim.

The vehicle will be delivered to a fleet customer.

Today, there are six different Toyota hybrids, covering the market from compact superminis and family hatchbacks to seven-seat MPVs.

Expansion of the range has gone hand-in-hand with accelerating sales; global sales of Toyota group hybrids are nearing seven million, with Prius now among the world’s most popular cars.