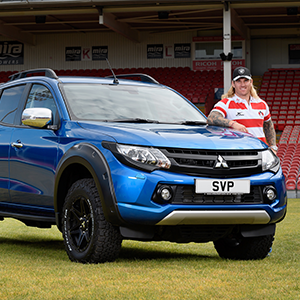 A trio of the UK’s most famous rugby stars are making a big impact on and off the pitch after each taking delivery of a Mitsubishi L200 Barbarian SVP – the first model to be produced by Mitsubishi Motors’ new Special Vehicle Projects programme.

Dylan Hartley, Northampton Saints and England captain, together with Gloucester Rugby’s internationals Ben Morgan and Richard Hibbard, picked up the keys to the limited edition models as part of their ongoing roles as Mitsubishi Motors’ Brand Ambassadors.

The players now join another exclusive club – only 250 of the limited edition truck being produced with half in Electric Blue metallic and the other half in Cosmos Black.

Inspired by the one-off Mitsubishi L200 Desert Warrior ‘Pre-runner’ that the manufacturer has built in conjunction with Top Gear magazine’s Tom Ford, the striking L200 Barbarian SVP is the ideal match for the rugby stars.

Dylan, who has 86 caps for the national side and has made over 230 appearances for Northampton Saints, said: “The standard L200 looks tough, but the SVP takes it to another level. With the big wheels, off-road tyres and black wheel arches, it really looks the part. It’s ideal for what I need, with plenty of power and more than enough space for the family and all the kit that we carry around for our lifestyle.”

His words were echoed by Ben, who has won 31 caps for England and played 94 times for Gloucester Rugby. The England and Gloucester Rugby number eight added: “It looks really aggressive with the big wheels and tyres and having the eighth built with the number stitched into the headrest is a very nice touch – I’ll definitely be hanging onto this one! The L200 drives really well and, with the cab on the back, it’ll be very handy for carrying all my tools, the dog and everything you need for a young family.”

Hooker Richard, who has 38 caps for Wales and has played 77 times for Gloucester Rugby, as well as three caps for the British & Irish Lions, was smitten with his new SVP: “The moment I saw Mitsubishi Motors tweet the SVP, I had to have it! Before I played for Gloucester Rugby, I’ve always had L200s and this one is a dream – if I was going to build another, I’d do it exactly like this. It’ll be great for when I go kayaking and paddle boarding and the colour is fantastic, the blue and black contrast really makes it.”

Lance Bradley, Managing Director, Mitsubishi Motors in the UK, said: “Dylan, Ben and Richard always strive to push the limits on the pitch, so we’re delighted to pair them with the exclusive L200 SVP, which is our most extreme and toughest pick-up truck ever. They are the ideal complement to each other.”

The supply of the trio of L200 SVPs is part of Mitsubishi Motors’ support of rugby at all levels, rising from grassroots all the way up to international. The brand has been a sponsor of England Rugby since 2016 and this year has become an official partner of Scottish Rugby. Additionally, it has been a sponsor of Gloucester Rugby since 2005 and also holds partnerships with Edinburgh Rugby and Salford Red Devils. 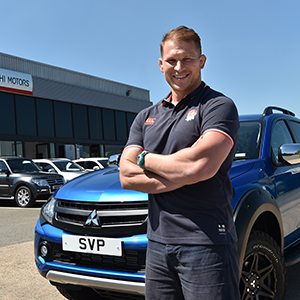 Inside, the four-wheel drive model has Barbarian-inspired ‘six-pack’ leather seats with suede-like ‘Alston’ inserts, while each vehicle’s individual limited edition number and the SVP logo are stitched into the headrests.

The Mitsubishi L200 Barbarian SVP is available to order now and is priced from £28,479 (excluding VAT) for both blue and black versions.