The Times Are Changing For The Ford Mondeo 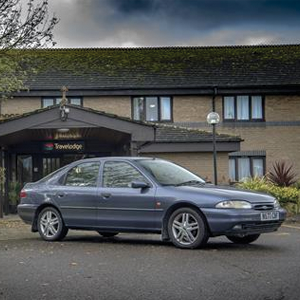 It was the year Wet Wet Wet topped the charts, that Alan Shearer became the UK’s most expensive footballer, that Charles and Di separated, and we all had to pay 15% interest rates as the pound crashed out of Europe. But 1992 was also the year Ford launched one of the best-selling cars ever made: the Mondeo.

Fast-forward 25 years and while the 1990s are enjoying something of a revival, the cars that kept the decade moving are on the verge of extinction, according to consumer motoring website Honest John Classics.

‘We’ve seen a lot of 1990s nostalgia in the past few years with everything from Britpop to PJ & Duncan making a comeback,’ said Keith Moody, editor of Honest John Classics. ‘But 1990s cars are on the brink of disappearing completely.

‘Former Prime Minister Tony Blair used the term ‘Mondeo Man’ to capture the image of the self-made man of middle England, owning his own home, earning a decent wage, supporting his family – a swing voter looking to back the political party that put the most money in his pocket.

‘Now the Mondeo’s fate is typical of so many 1990s cars that we grew up with. Bought for a bag of chips, run on a shoestring, and thrown in the bin. At this rate, there won’t be any left for future generations to enjoy.

‘The classic car sector is worth £5.5bn to the UK economy with more than one-million classics on the road and employing 35,000 people*. It’s easy to forget that established classics like the Morris Minor and the Ford Cortina were seen as affordable transport once – rather than the big money prices paid today’

‘These are the cars that petrolheads in their 30s and 40s grew up with. That they learnt to drive in. That they went on family holidays in. These are the next-generation of classic cars – and they’re being bought by people who want to be reminded of their connection to times, people, and places who might no longer be with them.’

Ultimately, the writing is on the wall for Ford’s world car. The Mondeo no longer makes the list of top ten best-selling cars in the UK, with ‘Mondeo Man’ now much more likely to drive a Mercedes C-class or a Nissan Qashqai.

For fans of 1990s cars, Honest John Classics is a must-visit website. Unlike other classic titles, it focuses on accessible, affordable everyday classics of today and of the future, with a huge focus on the cars of the Eighties and Nineties that tend to attract the most attention these days.