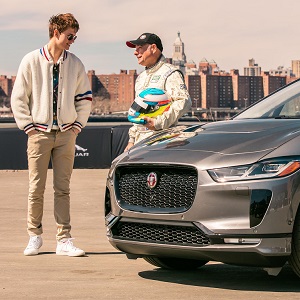 Jaguar Land Rover is proud to announce it will show three new vehicles at the New York Motor Show alongside the widest range in the history of the company.

Developed and engineered by Jaguar Land Rover Special Operations, the F-PACE SVR is the fastest and most powerful version of this award-winning SUV. The F-PACE won the 2017 World Car of the Year (WCOTY) overall award and design award, as well as numerous other global awards. The all new F-PACE SVR is engineered in the UK by Special Vehicle Operations.

The Jaguar I-PACE is the electric vehicle drivers have been waiting for. Clean, smart and safe, I-PACE delivers sustainable sports car performance, next-generation artificial intelligence (AI) technology and five-seat SUV practicality to place Jaguar at the forefront of the EV revolution. With a state-of-the-art 90kWh lithium-ion battery using 432 pouch cells, I-PACE delivers a range of up to 480km (WLTP cycle). Owners will be able to achieve a 0-80 per cent battery charge in 40 minutes using DC charging (150kW).

For the first time in the USA the full Jaguar SUV PACE family will be on display: the new electric I-PACE, the E-PACE compact performance SUV and the 2017 WCOTY-winning F-PACE, as well as the F-PACE SVR making its global debut.

Fifty years after Land Rover created the Range Rover, it brings to market the fastest and most luxurious Range Rover yet – the SV Coupé. A beautifully curated interior sets new standards for materials and craftsmanship, with extensive personalisation options for SV Coupé clients. Only 999 models will be available.

The SV Coupé is hand-assembled in the UK. A dramatic and desirable addition to the Range Rover portfolio, it combines a seductive body design and supremely refined interior that sets new standards for materials and craftsmanship.

Ahead of the show, Hollywood actor Ansel Elgort put his driving skills to the test behind the wheel of the all-electric I-PACE to take-on the Jaguar Smart Cone Challenge.

The Baby Driver star got a taste of the all-wheel drive agility and instant torque of Jaguar’s first electric vehicle (EV) in his native New York. With 400PS and 696Nm of torque, I-PACE offers acceleration from 0-60mph in 4.5 seconds – allowing Ansel to prove his driving skill was more than a camera trick.

Filmed at Seret Studios in Brooklyn ahead of the I-PACE’s North American debut, the industrial, dockside location was the ideal place to demonstrate the speed and agility of the performance SUV. Watch Ansel’s performance here.

Jaguar Land Rover now has its largest range ever, demonstrating breadth of capability with design and engineering excellence at the forefront of every vehicle – cars that are packed with technology for good and are also safe, smart and clean.

Jaguar Land Rover employs more than 43,000 people globally and supports around 240,000 more through dealerships, suppliers and local businesses. Manufacturing is centred in the UK, with additional plants in China, Brazil, Austria and Slovakia.

Jaguar Land Rover, is driven by a desire to deliver class-leading vehicles, which will provide experiences they believe their customers will love, for life. In 2017 Jaguar Land Rover sold 621,109 vehicles in 130 countries, with more than 80 percent of vehicles being sold overseas.

Innovation is continuous: JLR will invest more than £4 billion in the coming year on new product creation and capital expenditure.

From 2020 all new Jaguar Land Rover vehicles will be electrified, giving customers even more choice. A portfolio of electrified products will be introduced across the entire model range, embracing fully electric, plug-in hybrid and mild hybrid vehicles as well as continuing to offer ultra-clean petrol and diesel engines.