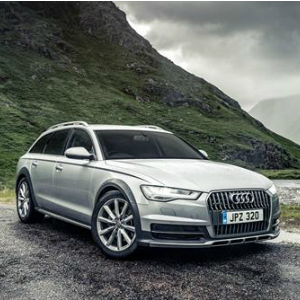 The sure-footed Audi A6 allroad, the quattro all-wheel-driven and air suspended Avant that is already notable as one of the most effective insulators against difficult winter driving conditions, is now available with an enhanced specification that makes it an even more protective and pampering means of weathering the storms.

Recently introduced Sport versions of the A6 allroad can be ordered now in time for delivery during the fast-approaching winter months, when the adhesive qualities of the quattro system and the raised ride height afforded by the standard four-level air suspension come into their own. To these, and the many other equipment items included in the standard model, Sport specification adds full LED headlights that replace the bi-xenon units of ‘standard’ A6 allroad models to further enhance visibility in the darkest conditions. A high beam assist function is also added as standard to automatically dip the beam when oncoming traffic is approaching. At the rear in Sport models, dynamic LED turn signals that operate in a sweeping motion increase safety and awareness for other road users.

New 10-spoke design 19-inch alloy wheels with a matt titanium finish, privacy glass and heated and folding mirrors round out the exterior enhancements, while inside sports seats in upgraded Valcona leather with full electric adjustment are complemented by luxurious Alcantara door inserts. These add to an already extensive equipment list that includes features such as SD card navigation, the Audi Music Interface, powered tailgate operation, the Audi parking system plus and deluxe four-zone air conditioning.

Rugged ability in any weather

Adaptive air suspension is fitted to every A6 allroad, endowing it with accomplished all-terrain ability but also a cossetting ride quality that absorbs even the harshest of road imperfections.

A dynamic or comfort mode can be selected using the Audi drive select system, and the suspension automatically adjusts to reduce aerodynamic drag at speeds above 74 mph by lowering the body by 15 mm. When more ground clearance is required, a lift mode can be engaged at the push of a button, raising ride height by 10 mm.

When negotiating more substantial off-road trails, the driver can easily monitor the impressive 20° slope angle and 17° ramp angle capability using the tilt angle display, which can be called up via the central MMI screen. Hill hold assist and hill descent control, which maintains a constant vehicle speed between five and 18 mph, are also standard.

Matrix LED headlights can be fitted as an option to dramatically increase the overall range and spread of illumination. A total of 64 separate projectors maintain a constant high beam function without dazzling other road users by electronically dimming segments when oncoming traffic or light sources are detected. The advanced units adapt to shift the light position in corners, while information from the navigation system automatically adjusts the full beam when entering or leaving built-up areas.

A head-up display can furnish the driver with essential information directly in the line of vision to reduce distraction, including speed and route navigation data. Also available is the innovative night vision assistant, which is capable of alerting the driver to people and large animals well in advance by using thermal imaging.

The more practical side of the allroad quattro can be further exploited by fitting a mechanically operated tow bar and a convenience pack, offering further storage and practicality solutions such as hard-wearing floor mats, a through-load facility and a luggage fixing kit.

A choice of three EU6-compliant six-cylinder TDI engines power the new A6 allroad quattro in standard and Sport specification. The 218 PS and 272 PS engines are mated to a seven-speed S tronic twin-clutch transmission, while the 320 PS and 650Nm output of the BiTDI is fed to the wheels via an eight-speed tiptronic transmission.