Sweden First To Use V90 Estate As Police Car 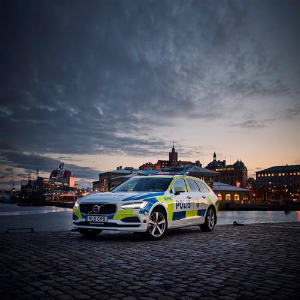 The Swedish police will take delivery of its first V90 police cars early next year, after the car recently achieved the highest rating ever in the Swedish police’s highly demanding driving test.

The demands on emergency vehicles are higher than on normal road cars. On top of that, unlike in many other countries, in Sweden the police car is judged as a workplace. This means any car has to meet strict demands in areas such as performance, comfort, quality and ergonomics in order to qualify as a police car.

The Swedish police car test focuses on five areas: a brake test, an obstacle course, evasive action tests with and without braking, and high-speed emergency driving.

The overall score for the V90 was 9.2 out of 10, the highest rating ever achieved by any car in this demanding test.

The final test protocol on the V90 prepared by Swedish police test drivers concludes that “overall, it is difficult to find any faults at all. Chassis, steering, suspension, traction control and powertrain all show exemplary performance. Quick lane changes at high speeds feel almost deceptively easy, the car does what it is told to do and shakes off lateral forces without any protest.”

While the Swedish police will be the first to start using the V90, Volvo Cars sells its police cars in other countries as well. Other police forces that in recent years have used Volvos include Norway, Italy, the UK and the Netherlands. The V90, too, will be made available to any interested police forces around the globe.

With the V90 police car, Volvo takes the highly refined driving experience of the award-winning standard V90 to the next level. To transform the premium estate into a suitable emergency vehicle, the Volvo Car Special Products department further develops the car to meet the specific demands of police forces.

For instance, the chassis is made stronger and more dynamic, the brakes and suspension are improved, and the car is fully equipped with all necessary tools and communication equipment. It takes about a week to transform a standard V90 into a police car at Volvo Cars’ special manufacturing facility in Torslanda, Sweden.

Volvo Cars has a long history in providing police cars: as far back as 1929, Swedish police fought crime from behind the wheel of a Volvo. In the decades that followed, classic Volvos such as the Amazon and the 144 also served in police uniform. More recently, the XC70 and V70 estates have been used by police forces. The XC70, too, was the best police car ever tested by Swedish police at the time of its introduction.