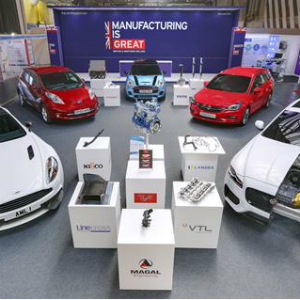 Figures released today show a planned £225 million investment by SMMT supply chain members over the next three years, as efforts continue to boost the British content of vehicles built in the UK.

In a new survey of more than 100 SMMT supply chain member companies, 94% said they plan to invest in their businesses over the next three years – at a total of £224,485,000. Of those, four in five (79%) intend to invest in plant, machinery or tooling; three quarters (73%) in skills and apprentices; and two thirds (66%) in new product development. 78,000 people are currently employed in the UK automotive supply sector, and seven in 10 companies (68%) said they plan to expand their workforce over the next three years. Potential investment does depend, however, on continued political and economic stability and the long term growth of the UK automotive sector.

The British supply chain is a critical element of the wider UK automotive industry, and consists of more than 2,000 companies contributing an annual £4.3 billion in value added (or tax receipts) direct to the UK economy. The sector suffered significant setbacks in past decades but is now undergoing a renaissance: 41% of the components in the average British-built car are now sourced locally, up from 36% in 2011.1 Efforts to maintain this growth are continuing, supported by both government and industry, and new business opportunities in the UK automotive supply chain are worth up to £6 billion.2

While the findings paint a positive picture of the health and confidence of British-based suppliers, respondents cited various challenges to success. The skills shortage is a key issue of concern, with two in five (41%) companies saying the availability of skilled workers, apprentices and graduates could impede their company’s growth in the next three years. Other possible barriers to growth include exchange rate inconsistencies – identified by 62% of respondents – competition from overseas (58%) and a lack of visibility among purchasers (31%). Fluctuations in the price of materials (33%); energy costs (25%); and difficulty securing funding or finance (21%) were also concerns.

Mike Hawes, SMMT Chief Executive, said, “Britain’s car industry is booming, exporting more than ever, and it’s encouraging to see this opening up huge opportunities for the UK supply sector. A strong domestic supply chain is critical to a successful automotive sector and we are confident that, with the right political and economic conditions, significant supply chain investment can be secured, delivering more jobs and growth. Many of the UK’s competitors have far larger and stronger supply sectors, however, so continued government collaboration through organisations such as the Automotive Council will be critical as we strive to re-shore more supply chain work.”

More than nine in 10 SMMT members (93%) told the survey that increasing the volume of business they do with UK-based vehicle manufacturers and major suppliers is important to their company’s future, while 77% of those that plan to invest said they will actively pursue new contracts with British-based customers over the next three years.

As well as winning new business at home, SMMT members are also keen to capitalise on opportunities to increase exports, with around two thirds (68%) of those polled currently sending 40% or less of their production overseas. This is likely to increase, with 46% of those planning to invest in their business looking to expand into export markets in the next three years. 44% are looking to identify new business export opportunities in western Europe, 29% in eastern Europe, and 27% in North America.

The survey, which polled 112 of SMMT’s 220 Automotive Components Section members, was conducted online by independent polling agency ComRes during May 2016. Respondents ranged from micro companies employing fewer than 10 people to large firms employing more than 250. Responding to questions about the overall health of the UK automotive supply chain, half (51%) of those surveyed said they feel the state of the sector has improved over the past three years, with only 6% reporting that conditions have worsened. More than three quarters (78%) said they feel positive about their business’ prospects for the coming three years.

The findings come as a significant boost to the wider sector as the Automechanika Birmingham aftermarket and supply chain trade show makes its UK debut. Opening today, the show will see thousands of industry decision-makers visit more than 550 aftermarket and supply chain exhibitors at the NEC to look for new business. Although the 14 other global Automechanika locations are traditionally aftermarket-only shows, the Birmingham event departs from this model to become the  first to feature supply chain companies.