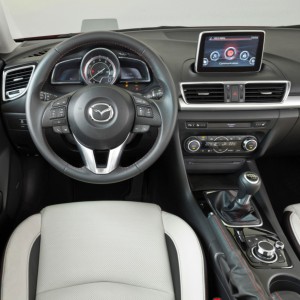 BETTER: Mazda3 will include fastback version

Mazda will include two bodystyles – hatchback and fastback – when the economy and emission-improved Mazda3 goes on sale in the UK later this year.

In an announcement of the best-selling vehicle’s new specifications, Mazda confirmed buyers will be offered the two-style choice.

Meanwhile, they also confirmed three petrol powerplants and one turbocharged diesel would be available in the lower, wider and lighter than ever vehicle.

A combination of low drag, low weight and super-efficient SKYACTIV engines and transmissions has helped the Mazda3 deliver best-ever economy and emissions figures.

The most fleet-friendly engine is the 150ps SKYACTIV-D clean diesel, which delivers 380Nm of torque at 1,800rpm.

Economy and emissions figures for the fastback version are 72.4mpg and 104g/km (manual), while the hatchback automatic is at 58.8mpg and 127g/km.

For petrol fans, the best efficiency can be found in the SKYACTIV-G, which is available in standard (120ps) and high-power (165ps) versions.

Lower and wider than the current model, the car is also lighter, despite performance-enhancing changes – such as bigger brakes and wheels – that normally add weight.

Curb weights start at 1,196kg (fastback) and 1,200kg (hatchback), making the vehicle one of the lightest in the C-segment.

Both models share the enlarged 2,700mm wheelbase – the longest in the C-segment and 60mm longer than the current Mazda3.

This has created more space for the engine and improved crash safety, as the front and rear overhangs have been shortened.

Meanwhile, the saloon features a different roof, rear window, rear wings and boot lid, in a design that extends the overall length to 4,580mm – 120mm longer than the hatchback.

Both models have rear seat backrests which fold almost flat and the saloon’s boot opening width is increased by 100mm to 1,102mm.

This means it can now accommodate three 67cm suitcases and has a total capacity of 419litres – a 69litre increase on its predecessor.