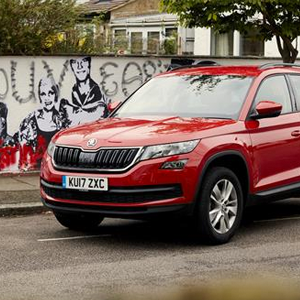 An Australian expat who moved to London more than two years ago is reconnected with his family in a heart-warming moment captured on camera and released today by ŠKODA.

Robbie Smith lives in the capital with his English girlfriend. He hadn’t seen his family from Melbourne in years until ŠKODA surprised him by flying them to the UK in secret and capturing the moment they reconnected.

On his daily commute, Robbie unsuspectingly passes a series of clues hinting at a family reunion including a graffiti mural of photos with his loved ones and an entire cinema decorated with posters of his life. He even unwittingly walks past Sir Bradley Wiggins holding a newspaper about Robbie before spotting his family sitting outside a local café.

Robbie said: “I am still so shocked. I was just walking my normal route and had no idea that my family would be waiting for me at the end. I can’t believe all the clues I missed along the way; it wasn’t until I noticed the cinema posters and saw my face that I realised something wasn’t quite right.

“I haven’t seen my family in years, and while talking on the phone and video messenger is great, it’s not the same as seeing them in person and being able to hug them.”

ŠKODA reconnected Robbie with his family to celebrate the launch of the Kodiaq, the brand’s first ever seven-seat SUV.

“We often rush trying to squeeze more in to our daily routines – the school run, dog walk, getting to work before rush hour, the last minute food shopping for dinner. It’s a familiar scene for millions up and down the country and whether we realise it or not it’s become the norm”, continued Stagg.

“Yet often it’s the time we spend connecting with the things that really matter to us that is the most rewarding, whether it’s revisiting a favourite place, restarting a sport or hobby, or spending time with family in the car. A car can be so much more than just getting from A to B – it can help you reach the people and places that matter to you.”

“We now want to inspire others to reconnect with what matters most to them with the launch of the ŠKODA Reconnect Fund; a chance for ŠKODA to make it a reality.”

The ŠKODA Reconnect Fund is now open at www.skoda.co.uk/reconnect-me. From reconnecting with a love of running, through a new pair of trainers, to reconnecting with an old friend by enjoying a once-in-a-lifetime experience together, ŠKODA will be facilitating reconnections however big or small.