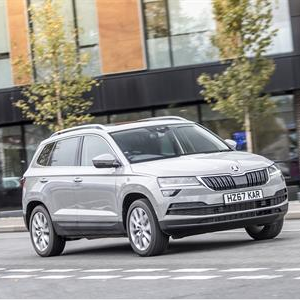 ŠKODA has made the all-new Karoq a particularly desirable vehicle for fleets thanks to the launch of a SE Technology trim that has been exclusively designed for business customers, with higher specification above the SE trim included at no extra cost.

From small businesses to corporate fleets, the Karoq offers a host of technology and driver assistance systems at their fingertips. The latest addition to the ŠKODA model line-up sets the standard for driver connectivity with features that include Amundsen satellite navigation with an eight-inch touchscreen display with European mapping, voice control and integrated Wi-Fi. Drivers can connect to the infotainment system with ease thanks to Smartlink+ that pairs with Apple CarPlayTM and Android AutoTM and the Karoq also offers wireless charging and Phone Box Smartphone signal boost for improved communication on the move.

Front and rear parking sensors, panoramic sunroof and LED daytime running lights come as standard on the SE Tech model, as well as adaptive cruise control. The SUV also includes the useful ŠKODA touches that customers have come to rely on, such as the ice scraper in the fuel cap, umbrella under the passenger seat, removable LED torch and handy storage compartments in the boot.

The inclusion of VarioFlex seating helps to keep up with the demands of both business and home-life, with the ability to create even more space that starts with 521-litres in the boot and increases to a vast 1810-litres with all rear seats fully taken out.

Henry Williams, Head of Fleet for ŠKODA UK, commented: “The Karoq is a much-anticipated addition to our all-new SUV family that began last year with the seven-seat Kodiaq. It’s a highly versatile SUV that is packed full of tech and safety features that, combined with the competitive Whole Life Costs, is going to be an attractive option to both fleet managers and drivers.”

Fleets have the choice between four engine options, including two petrol engines with outputs ranging from 115PS to 150PS, and two diesel engines ranging from 115PS to 150PS. All four are available with seven-speed DSG transmission as an option, and the 2.0 TDI diesel engine available with four-wheel drive. The most powerful petrol model – the 1.5 TSI 150PS DSG, has a P11D of £23,310 and BIK of 24%.