Sixth Win In A Row For Dacia Sandero At Awards 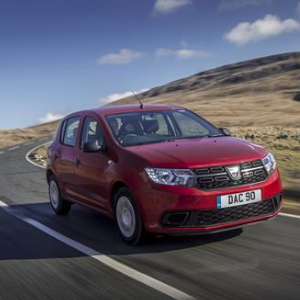 The Dacia Sandero has been awarded the title of ‘Best Small Car for less than £12,000’ for the sixth consecutive year by What Car? at an awards ceremony in London this evening.

The Sandero first picked up the award in 2013, following Dacia’s launch in the UK, and again in 2014, 2015, 2016 and 2017. The no-nonsense supermini has now taken the honours once more, offering a class leading mix of quality, practicality, comfort and low running costs. Starting at just £5,995, its ‘shockingly affordable’ price tag is just half the amount of the category it competes in.

Commenting on the decision to give the award to the Sandero for the sixth time, Steve Huntingford, Editor, What Car?, said: “It might be the UK’s cheapest new car, but don’t write the Sandero off as a bargain basement novelty – it’s surprisingly practical, with one of the largest boots in this class. You won’t find this much space for so little in any other new car. The Sandero also feels better to drive: the handling is tidy enough and the ride is surprisingly comfy for such a cheap car. You can buy a Sandero for less than £6,000, but we recommend spending a little more to get mid-range Ambiance trim. This adds niceties such as air-conditioning, central locking, electric front windows, a DAB radio and Bluetooth. It also replaces the standard black plastic bumpers with body-coloured ones that look a lot smarter.”

Commenting on the result, Louise O’Sullivan, Head of Dacia UK said: “We’re incredibly pleased that the Sandero has been recognised by the judges at What Car? for an amazing sixth consecutive year. It just proves that the Sandero still offers customers even more value for money than higher priced cars with a surprising level of interior and exterior kit while remaining the most affordable new car in the UK.”

The Dacia Sandero five-door hatchback is available in three trim levels with a choice of two petrol engines and one diesel engine. Pricing starts from £5,995, making it the lowest priced new car on sale in the UK today.

The specific TCe 90 Ambiance version chosen by What Car? comes with features as standard such as air conditioning and DAB radio – it is the most affordable car on sale in the UK with air conditioning as standard. This is in addition to Bluetooth connectivity, electric windows and remote central locking.

The Dacia brand continues to go from strength to strength in the UK with nearly 120,000 new Dacia vehicles sold in the last five years.