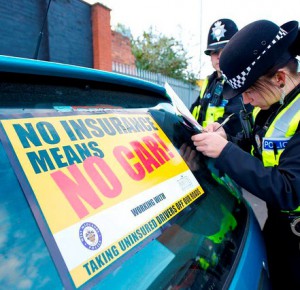 Insurance dodging is rife in the UK, the Institute of Advanced Motorists (IAM) have claimed, after shocking figures revealed 226,803 drivers have points for the offence.

The figure, obtained via a Freedom of Information (FOI) request, means that roughly one in 200 drivers have been caught red-handed by police.

However, the IAM claim that the real number of motorists driving without insurance could be much higher.

Simon Best, Chief Executive of the IAM, said: “These findings are shocking.

“Those 200,000 individuals who drive whilst uninsured place the burden back on those who abide by the law through higher premiums and potentially the cost of vehicle repair.

“The most concerning fact is that this could just be the tip of the iceberg, as these numbers only represent those who have been caught and penalised.

“Insurance fraud and uninsured driving are also growing problems that need to be tackled through a coordinated approach from enforcement authorities.

“It is not acceptable that drivers pay up to £70 in higher premiums to compensate for those who ignore the law.”

Young drivers were by far the worst offenders – every one in 100 motorists aged 17-35 have been punished for driving uninsured.

Men are far more likely to commit the offence across both licence categories and all age groups.

Shockingly, in the 17-24 age category, men are four times more likely to have points on their licence for driving uninsured than women.

Figures also revealed drivers over the age of 65 were least likely to dodge insurance – just 3,867 (0.06%) had points for the offence.

Meanwhile, 0.44% of those who had not even passed their driving test were caught without insurance.

As well as six points and a fine for driving uninsured, an eighteen year-old with a £950 premium could expect to see this increase to £2,195.

Peter Harrison, Car Insurance Expert at MoneySupermarket, said: “It’s astonishing how many drivers are still prepared to hit the road without insurance.

“Not only is it illegal but you could face thousands of pounds in liability, a conviction, six points on your licence and a hefty fine should you be caught out or be involved in a crash.

“Furthermore, insurance fraud adds £39 to the cost of every motor premium and uninsured driving an extra £30 – this is not fair on law-abiding motorists.

“The cost of insurance premiums will no doubt have influenced the decision from some drivers to forgo insurance altogether.

“However, the penalties for not having insurance are great, and could even result in your vehicle being confiscated.

“Although car insurance premiums may appear high, having suitable insurance and proving you are a safe driver will help bring premiums down over time.

“Not having insurance, and being caught without it, could result in you not being insurable in the future.”