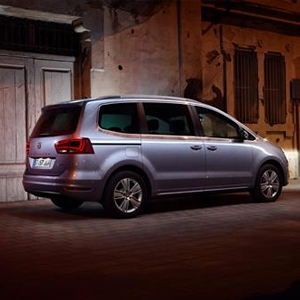 SEAT, together with the start-up Shotl and with the collaboration of Moventis and Media Urban SL, is implementing a shuttle service in Can Barata, Sant Cugat del Vallès (Barcelona), one of the first cities in Spain to become a benchmark Smart City.

This shared mobility initiative, in a pilot test stage for a month, offers flexible routes that are adapted to demand in real time. The vehicle used for the service is a SEAT Alhambra, an MPV seating up to seven passengers provided by the company.

With the goal of studying and providing more efficient urban mobility that solves some existing mobility problems, such as traffic congestion, improving environmental quality, increasing the efficiency of certain bus lines, etc., this pilot test will be operational in the second half of July and the first half of September between the neighbourhood of Can Barata and the Volpalleres train station, offering efficient alternatives to a bus service with irregular demand and low passenger numbers.

With this project, SEAT continues to promote its strategy of enhancing the easy mobility ecosystem by providing the residents of this municipality with a SEAT Alhambra for the on-demand shuttle service. Users can request the service through the Shotl app, which will also inform them of the estimated waiting time and arrival time at their destination. The system unifies the requests and facilitates the transport of several people at the same time, resulting in mobility that is efficient and connected.

Moventis, the urban transport operator in Sant Cugat del Vallès, will perform the service by contributing and coordinating the human resources. With this move, Moventis strengthens its commitment to innovation in the broad concept of mobility.

This groundbreaking service had its initial scientific pilot promoted in early 2017 by CARNET, a vehicle and urban mobility research hub created by SEAT, Volkswagen Group Research and the Polytechnic University of Catalonia (UPC), which aims to explore future mobility concepts and solutions in Barcelona. This pilot project was carried out with the collaboration of RACC and Shotl, whereby the users, UPC students and RACC staff, were shuttled to their destination together with other commuters with a similar route.

At the last edition of the Smart City Expo World Congress, in November 2016, where the developments achieved until then related to the Barcelona Smart Shuttle concept were presented, a simulation determined that with 500 vehicles operating this kind of on-demand transport service, each vehicle would have an average occupancy of 4.5 passengers and could replace 2,000 private vehicles during rush hour. This would result in a CO2 emission reduction and would greatly simplify urban mobility in the city of Barcelona.

In this context, the pilot test promoted by SEAT, start-up Shotl and transport operator Moventis for the residents of Sant Cugat del Vallès is a move towards more efficient, sustainable and digitised mobility that will enable mobility patterns to be studied and analysed to work on innovative solutions, as well as consolidate SEAT’s position as a benchmark carmaker in the scope of connectivity.