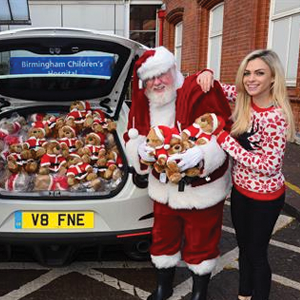 Autosport International and Ferrari have teamed up with Rays of Sunshine Children’s Charity, which brightens the lives of seriously ill children by granting their wishes and granting hospital ward wishes, to deliver some Christmas cheer to children at Birmingham Children’s Hospital today.

Santa was on hand to take delivery of a sack full of Ferrari teddy bear gifts for the children from a luxurious and powerful Ferrari GTC4Lusso T, before meeting the children in the hospital’s Renal Unit. Youngsters on Ward 1 – aged from six days to 17 years old – were delighted when Santa turned up to pay them a special surprise visit.

After handing out all of the gifts and posing for pictures with the children on the ward, Santa was on hand to take fulfil a few Christmas wishes and show the children around the turbocharged V8 supercar outside. The GTC4Lusso T can go from 0-60mph in just 3.5 seconds – enough to make Rudolph look slow. Its V8 produces more than 610 horsepower and was an instant hit with the children as they got to sit in and take a look around the car with Father Christmas himself.

The gifts were delivered just in time for the Yuletide period by Emma Walsh – TV personality, singer and social media star. Walsh appeared on reality TV Show Made in Chelsea for season 10 and has a racing license, making her the perfect person to ensure Santa received his gifts on time. She now has a YouTube channel (Miss Emma Walsh) involving cars and lifestyle videos.

The visit came ahead of a busy period for Santa and for the show, as it revs closer towards Birmingham’s NEC next month. Autosport International is set to open for four days from January 11th. Ferrari will be the main feature for 2018 as the Italian marque showcases a range of racing cars from its 488 Challenge all the way through to its celebrated F1 teams machinery.

Kate Woodley, Show Director for Autosport International, said: “We are so happy that Santa could pay the youngsters at Birmingham Children’s Hospital a special visit at what is arguably his busiest time of year. There is surely no better way for his presents to arrive than in a Ferrari, the iconic marque which will be playing a feature role at our show in the New Year. We hope visitors will have as big a smile on their faces at the NEC in January as the children looking around the car today.”

The event is part of Motorsport Network’s UK title Autosport – one of the world’s leading print and online motorsport publishers.

Make sure you head over to get your tickets.