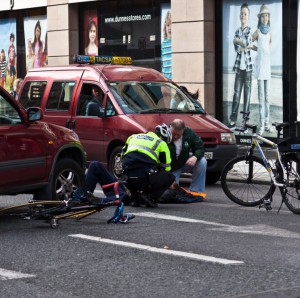 Increased cyclist and pedestrian deaths in Scotland show that improving vulnerable road-user safety should be a priority, the Royal Society for the Prevention of Accidents (RoSPA) have insisted.

Provisional road casualty figures show that 898 cyclists were injured on Scottish roads in 2012, with 167 seriously injured and nine killed.

Cyclist injuries increased by 9% compared to 2011, with serious injuries up by 11 and deaths up by two.

Karen McDonnell, Head of RoSPA Scotland, said: “As in previous years, the publication of road casualty figures for Scotland has shown that we cannot lose sight of the work that still needs to be done on making our roads safer, particularly where vulnerable road users like cyclists and pedestrians are concerned.

“RoSPA encourages people to walk and cycle and we know that concerns about safety are often cited as barriers to these modes of transport.

“We therefore support initiatives that seek to improve the safety of cyclists and pedestrians because they can prevent injuries and have other health advantages too.”

Child casualties decreased, with two deaths compared with seven in 2011; one victim was a cyclist with the other a pedestrian.

“However, we urge all those involved in road safety across Scotland to redouble their efforts in these areas.

“Reductions in deaths among car users and motorcyclists are on course to meet the target set for 2020, but more work is clearly needed if the target is also to be met for cyclists and pedestrians.”

Scotland’s target is to reduce the number of people killed in road accidents by 2020, based on a 2004-08 baseline average.

Image courtesy of informatique, with thanks.