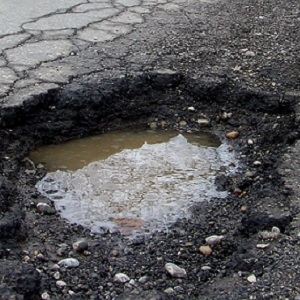 The Road Haulage Association welcomes the news that Government is to make a further £100 million available to councils across the UK to repair potholes and other damage caused by recent extreme weather conditions.

“This news is good for all road users but in particular for road transport operators,” said Chief executive Richard Burnett. “Transport Secretary Chris Grayling says that people rely on good roads to get to work and to see friends or family.

“For hauliers, the road network, including the motorway system, is their workplace. However, harsh winter conditions have seen many roads fall into such a state of disrepair that many are no longer fit for purpose.

“We understand that the money will help repair almost 2 million potholes. The cost to road hauliers for repairs to damaged suspension systems and increased tyre wear for example, is already considerable.

“Local councils must acknowledge that the problem extends well beyond the main roads. Many distribution centres are based on large industrial estates for which the access roads are not part of the strategic road network. The need for these side roads to be maintained is equally important in maintaining the viability of local businesses and the regional economy.”

The further £100 million is on top of the £75 million in government funding already given to councils from the Pothole Action Fund this year, as well as the additional £46 million boost for highways authorities announced just before Christmas. Around 7 million potholes will be filled due to this money, announced in the 2016 Budget.