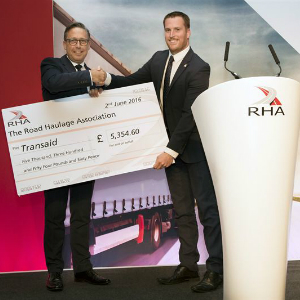 The Road Haulage Association (RHA) marked its first anniversary as a corporate member of Transaid by presenting the charity’s Chief Executive, Gary Forster, with a cheque for £5,354 at the RHA’s annual members’ lunch.

The donation, which was presented by Richard Burnett, the RHA’s CEO, was raised as a result of the company’s new scheme that encourages its members to contribute to Transaid at the start or renewal of their memberships.

“It’s been a phenomenal first year with Transaid and I’m proud to see my colleagues rallying together for a truly great cause. I look forward to our continued partnership and to reflecting on the positive difference we’ve helped Transaid to make to people’s lives in years to come,” says Burnett.

In addition to providing valuable financial backing, the RHA is taking a more active role in its support of Transaid. Notably, Burnett has signed up to the Cycle South Africa challenge in 2017 – a gruelling 450km five-day cycle ride from the Western Cape to Cape Agulhas, the southernmost point of South Africa.

“Our alliance with Transaid has opened up a wealth of hands-on experiences for our employees and I’m really excited about Cycle South Africa. It’s going to be one of the toughest challenges I have ever taken on, but I’m honoured to go out there and push myself in the name of Transaid.”

This August, the RHA’s Technical Director Steve Biddle and Training Manager Bob Auchterlonie will swap their offices for Transaid’s new road safety programme in Malawi. During their two-week secondment, the pair will deliver UK-standard vehicle inspection training to the project’s students.

Forster says: “We are always grateful to our corporate supporters for their incredible efforts which underpin our work in Africa. Their generosity and dedication to challenges, secondments and general fundraising are truly inspiring.

“We would like to thank the RHA for supporting us for the past 12 months and hope that this meaningful partnership continues long into the future,” Forster adds.

We at Fleetpoint would also like to offer our congratulations to RHA for their support for such a worthy charity.