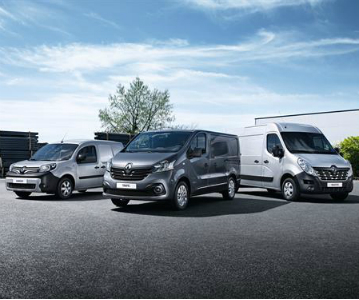 Renault has added to the appeal of its best-selling LCV range with a raft of specification enhancements, including the availability of Euro 6-compliant engines for the Renault Kangoo, Trafic and Master.

The extensive upgrades follow Renault being Europe’s number one best-selling LCV brand for the 18thconsecutive year and its range of LCVs being more popular than ever in the UK with 25,458 sold in 2015. By offering Euro 6 engines now, Renault is conforming to legislation change that will be effective from September and reaffirming its commitment to innovation and the environment.

As part of the enhancements, all Euro 6-engined Renault LCVs now come with the benefit of a Thatcham-approved alarm as standard and many receive more power than their Euro 5 equivalents. There are now also significantly more versions available across the Renault Kangoo, Trafic and Master ranges, the additions offering LCV buyers even greater choice.

Following the launch of a Euro 6-compliant Renault Kangoo in 2015, the growing popularity of the efficiency-enhancing ENERGY engines and the well-appointed Business+ trim level, the range has been expanded to include more versions than previously available with the Euro 5 engine. In order to conform to Euro 6 legislation, Renault has reduced the amount of NOx (Nitrous Oxides) produced by the Renault Kangoo’s engines with the addition of a NOx trap.

All Renault Kangoo Maxi versions will feature the ENERGY engines – offering fuel economy of up to 62.8mpg (NEDC Combined) – that work to optimise fuel consumption and reduce total cost of ownership with such features as Stop & Start technology. The popular standard length Kangoo (ML) will be solely available with ENERGY engines until the start of 2017, when more engines will be added to the range.

The award-winning Renault Trafic – one of the most popular LCVs on the UK’s roads for over 35 years – welcomes additional versions to its extensive range, Renault increasing the availability of the most popular engines and trim levels to provide customers with an even greater product offering. Notably, the ENERGY dCi 95 engine has been introduced to the Trafic for the first time, providing customers with a larger range of its most cost effective LCV engine.

Utilising a Selective Catalytic Reduction (SCR) system and Adblue®, the Renault Trafic’s range of Euro 6 engines are more powerful than their Euro 5 predecessors by 5 hp. These encompass the single turbo dCi 95 and dCi 120 engines, together with the twin turbo ENERGY dCi 125 and ENERGY dCi 145 engines.

The Euro 6 Master, which boasts engines that are 5-10 hp more powerful  (depending on version) than their Euro 5 equivalents and use a combination of Selective Catalytic Reduction (SCR) system and Adblue®, has been enhanced with the addition of 40 more versions. These latest versions are designed to meet the requirements of even more customers, including the introduction of new variants with the best performing ENERGY engines, particularly the ENERGY dCi 110, and the increasingly popular Business+ trim level. There are also new versions of the Crew Van, including long-wheelbase versions, and the availability of rear-wheel drive, single rear wheel panel vans with single as well as twin turbo engines.

All Euro 6 Renault LCVs feature enhanced security with the standard fitment of an alarm. Worth £150, this alarm allows the Renault LCV range to meet the higher security rating outlined in the new UK insurance criteria applicable to commercial vehicles that came into force at the start of the year.

The Renault LCV range consists of the Kangoo small van – comprising Kangoo, Kangoo Maxi and all-electric Kangoo Van Z.E – the Trafic, as well as the larger Master. A comprehensive range of factory and approved LCV conversions are also available to order. The all-electric Twizy Cargo is also a part of the LCV line-up – a unique way of transporting smaller items around urban environments.

In the UK, all Renault LCVs are available with four years’/ 100,000 mile warranty and four years’ roadside assistance, providing the ultimate peace of mind. All Renault LCV vehicles also come with the reassurance of the Renault Business Quality Commitment – the manufacturer’s 13-point plan that guarantees customers will receive a class-leading service. Designed to keep customers moving no matter what and deliver hassle-free business motoring, the plan covers everything from an impressive warranty and transparent pricing to the availability of courtesy vehicles and a dedicated customer hotline.